The Hidden Symbolism of the Harry Potter Logos 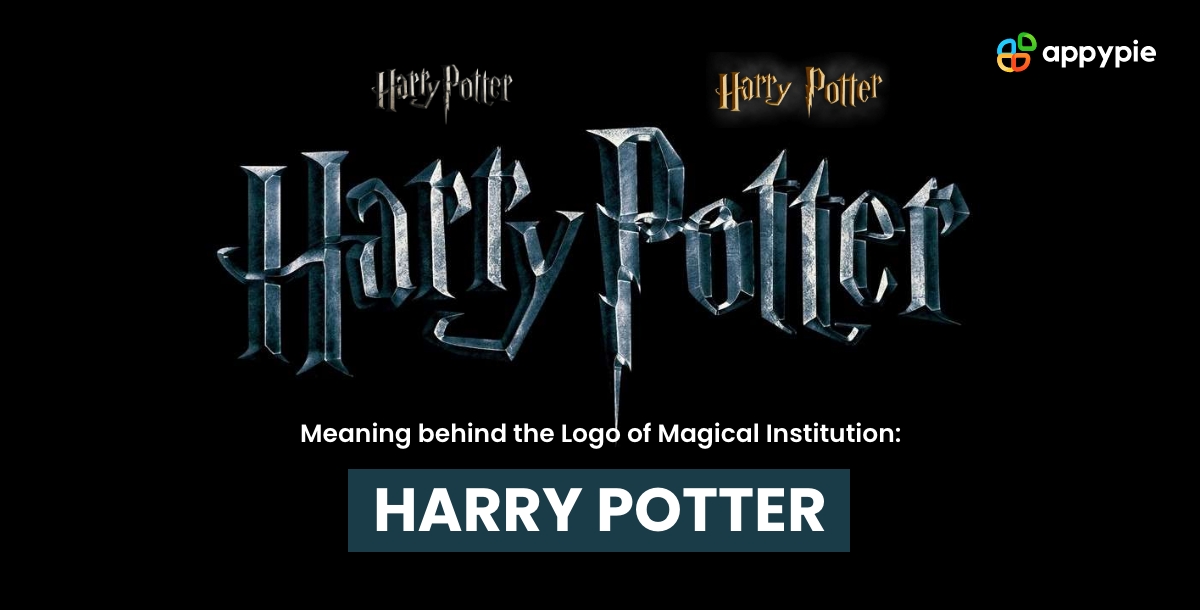 Hey everyone, today, let’s take an insight into the Harry Potter logo and the exciting history behind the classic series.

JK Rowling, the writer of the magical series, has brought the unique school, Hogwarts, to millions of people worldwide. The school is for those children who have the pure blood of magic. JK Rowling got this idea while she was traveling to London from Manchester.

Rowling completed the first series of Harry Potter books in 1995. Then after so many rejections, she finally got the nod from Barry Cunningham, the editor of Bloomsbury. Therefore, in June 1997, the first series with 1000 copies were released.

The last series of the franchise was released in July 2007. The book’s title was ‘Harry Potter and the Deathly Hallows.’ The book became one of the fastest-selling novels of all time, making Harry Potter a global brand.

The book sold about eleven million copies on the first day in the UK and US and won several awards. Now after knowing a little about the book and the author, let’s dig into the history of the Hogwarts logo.

The History Behind Harry Potter Logo

The harry potter logo emits ancient energy. It is a customized badge for the Hogwarts school of magic that teaches students about wizardry and witchcraft. The school is from the tenth century in the Scottish highlands and is considered one of the world’s outstanding schools. 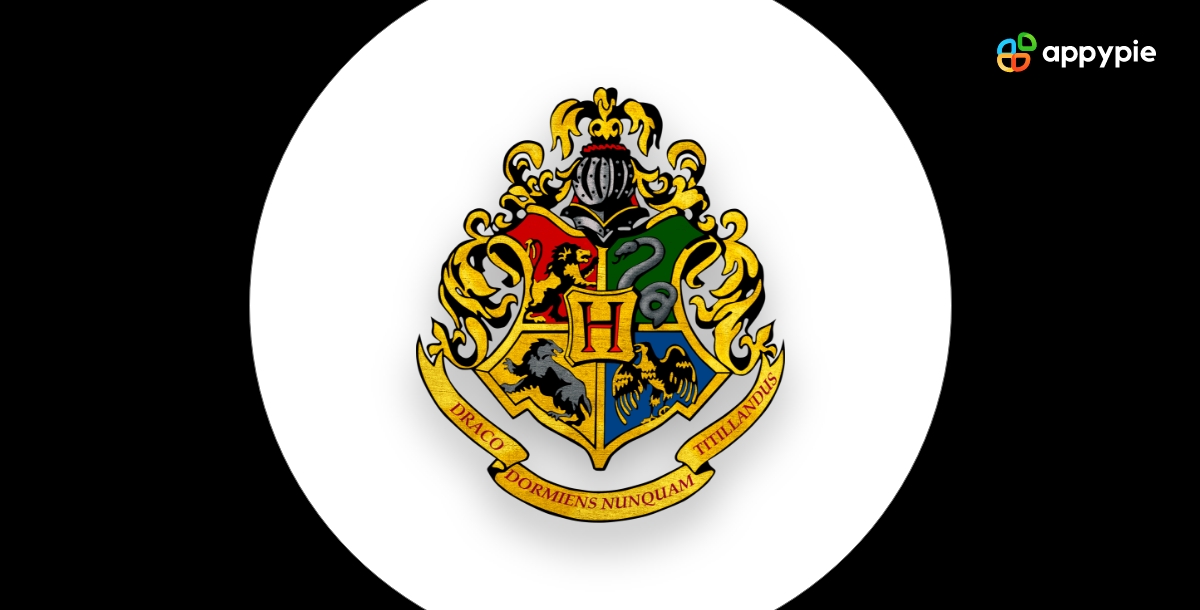 Admission is only open for magical students of Irish and British descent. The children can only get their entry done after completing their eleventh birthday with a post by an owl. However, one school staff also visits to raise awareness among those children who don’t know about their talent.

The school was founded by four dominant witches and wizards in 990 AD. Their names were Godric Gryffindor, Salazar Slytherin, Rowena Ravenclaw, and Helga Hufflepuff. The team aimed to spread magical knowledge to everyone. This will help them to be aware of their gift forever.

Similar to the school, the Hogwarts logo also reflects the era it started. Also, the Hogwarts symbol evokes the values of the founders. The logo is like a shield that is divided into four sections. Each section represents each house of the school. Also, the sections stand for their founders and the faculty.

If we move in a clockwise direction, then in the top right corner, we’ve got the Gryffindor logo, Slytherin, Ravenclaw, and Hufflepuff. Also, the Hogwarts logo features four different animals representing each house against their house colors. In order to understand this mystical Harry Potter logo, it’s essential to understand the design elements.

The logo is a play of words, which is why the name is written in a slightly different way. The logo features a shadow and three dimensional lettering, as well as some interesting typography. I would say that the uniqueness of the Harry Potter logo lies in its simplicity and creativity. It is a very clever re-interpretation of the name, which makes the logo very memorable.

First of all, it’s the scar that connects Harry to his parents and his father’s enemy, Voldemort. The lightning bolt represents lightning which is another one of Voldemort’s powers. The lettering is the most important part of the logo. It has the main message from the author J.K. Rowling, “I must not tell lies.” The Hogwarts symbol is a shield with a lion on it, which symbolizes strength and courage. 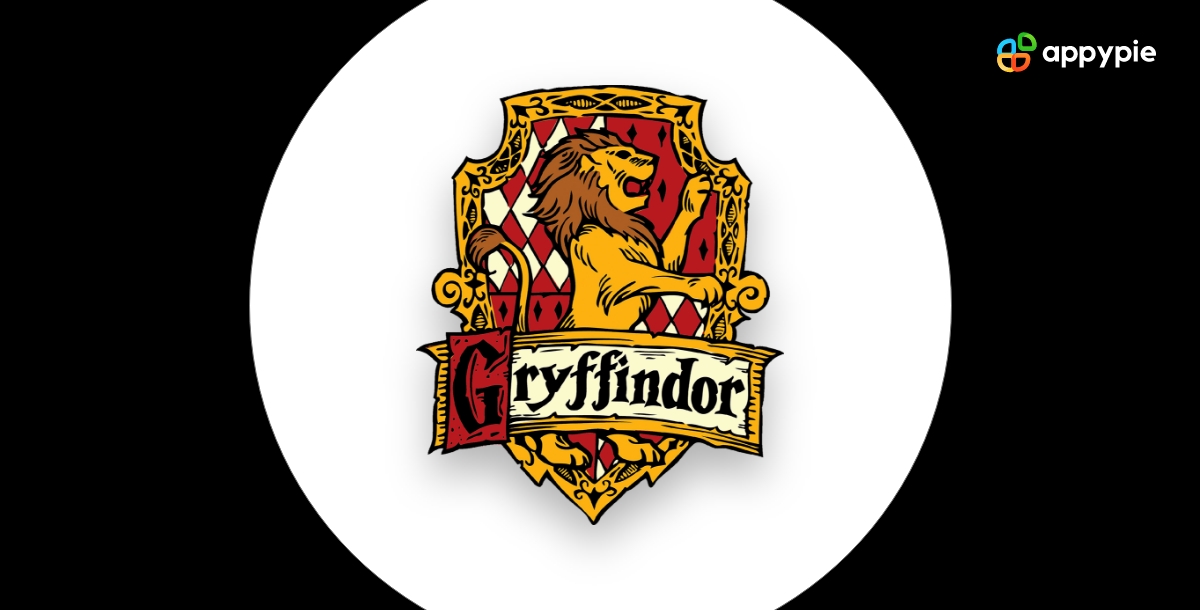 Gryffindor is actually the house of the lead character Harry Potter. The Gryffindor logo has a lion mascot. It’s in yellow against the red background. The lion stands in the upper left corner of the badge. The lion symbolizes noble, bright, bold, and fearless. It is believed the founder of the house, Godric Gryffindor used to have all these qualities.

Yellow and red are considered to be the official colors of Gryffindor. The colors red and yellow together reverberate the element of fire. Red represents energy and passion, whereas yellow stands for freshness and happiness. It has a gothic serif font as its wordmark. The font is readable and font. 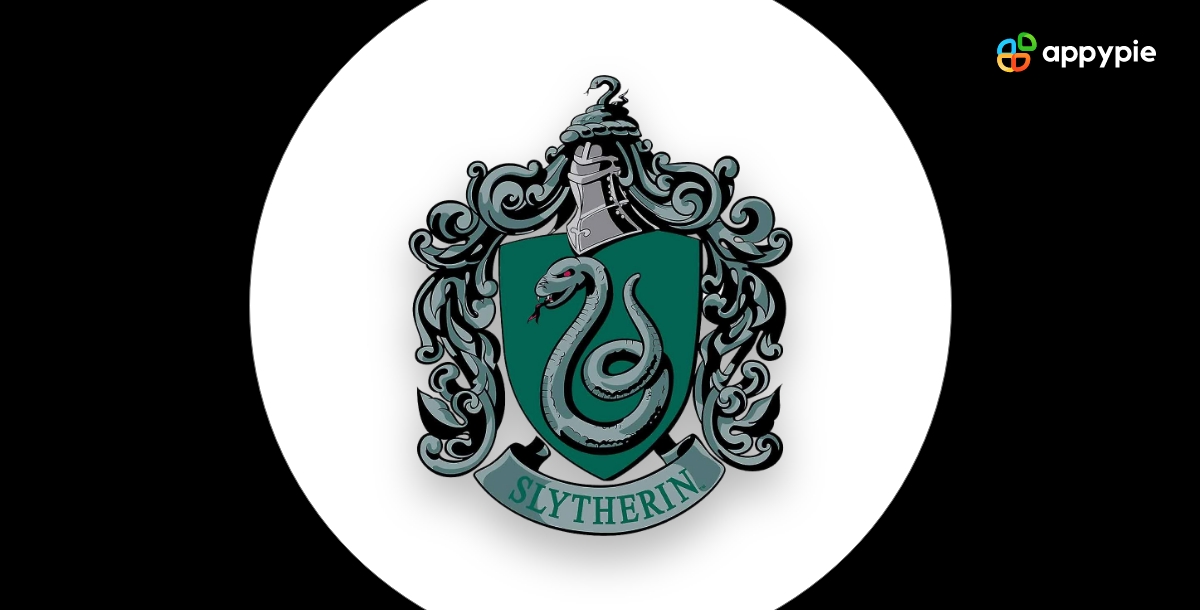 The Slytherin symbol has a silver serpent against a green background. The deadly snake is present on the top right of the badge. The cold-blooded reptile represents ambition, alertness, and cunning. The faculty of this daring house passes all these qualities to their students. Thus, this house’s students are brilliant, ambitious, brave, and cunning.

Slytherin is known as the house of snakes, and it treasures silver and green. When both colors get combined, they echo the element of water. Green denotes harmony and ambition, whereas silver conveys gratefulness and hope. The wordmark of Slytherin has a readable and simple serif font. 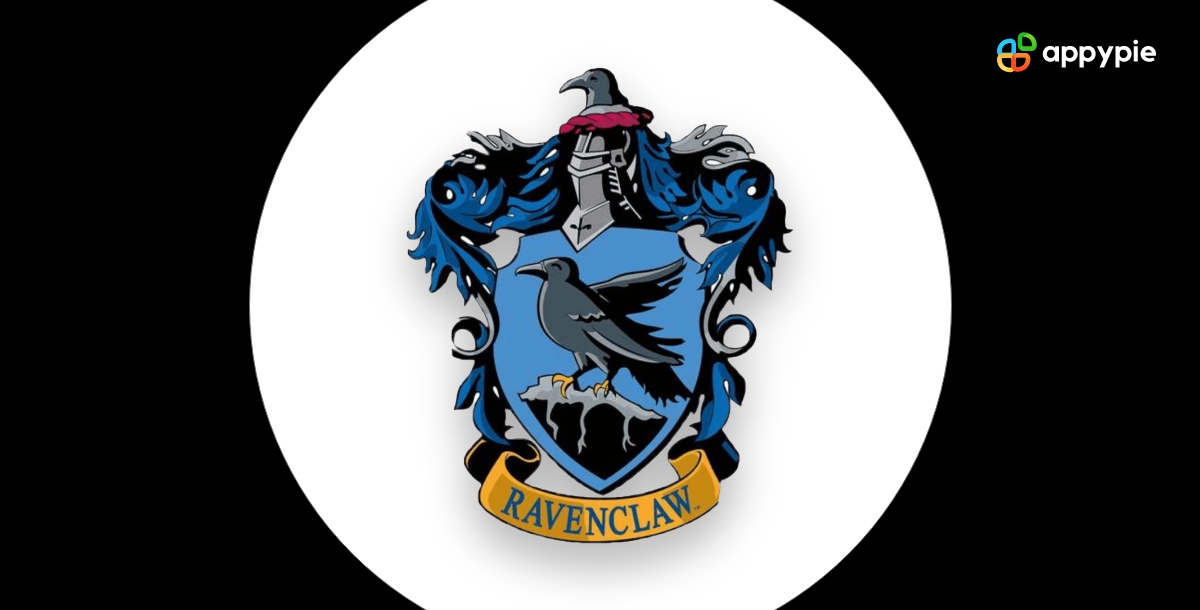 The house of Ravenclaw represents a bronze eagle against a blue background. This powerful bird is present at the bottom right corner of the badge. The fearsome eagle denotes courage, vision, creativity, and intelligence. All the students from this house mostly have all these qualities.

Ravenclaw is known as the house of the eagle, and it belongs to the element of air. Bronze and blue are known to be the official colors of the house. While blue signifies safety and loyalty, bronze conveys security and strength. The wordmark of Ravenclaw represents a serif personality. Also, it looks readable and classic. 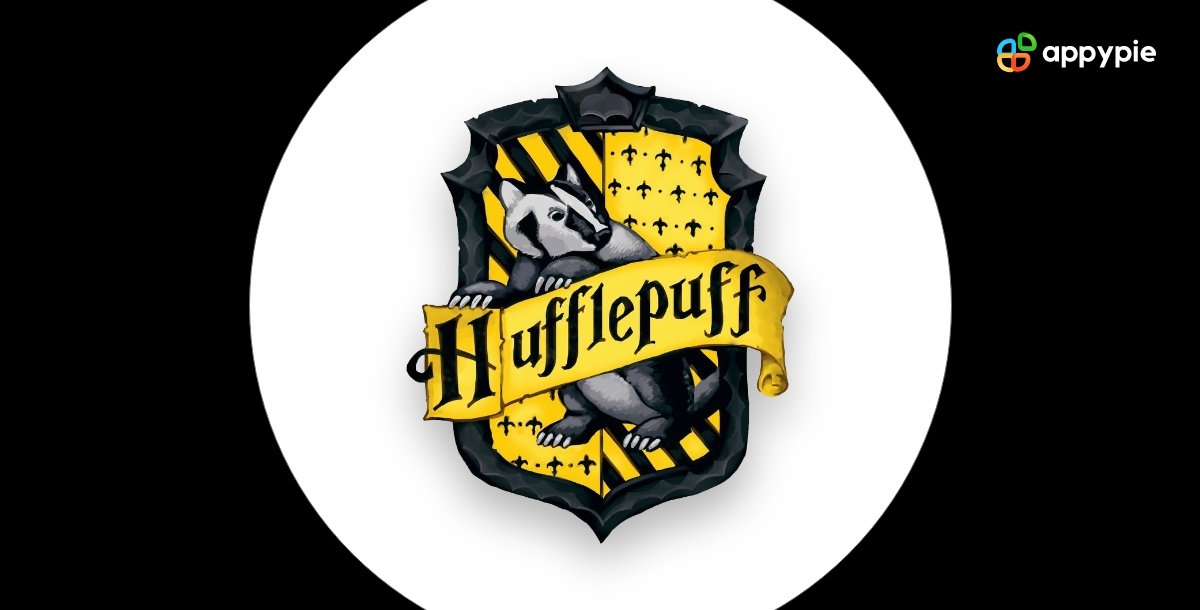 A walking badger is present at the bottom left of the Hufflepuff logo. It’s in black against a yellow background. The clever omnivore is the symbol of the Hufflepuff house. The faculty expects their students to be patient, loyal, and honest. Because these are a few qualities that a badger is known for. Also, it represents friendship, gratitude, tenacity, and hard work.

The house of Hufflepuff idolizes yellow and black. Both colors evoke the earth element. The black color conveys power and mystery, whereas yellow signifies intellect and honor. The font carrying the Hufflepuff wordmark is similar to the Harry Potter font. 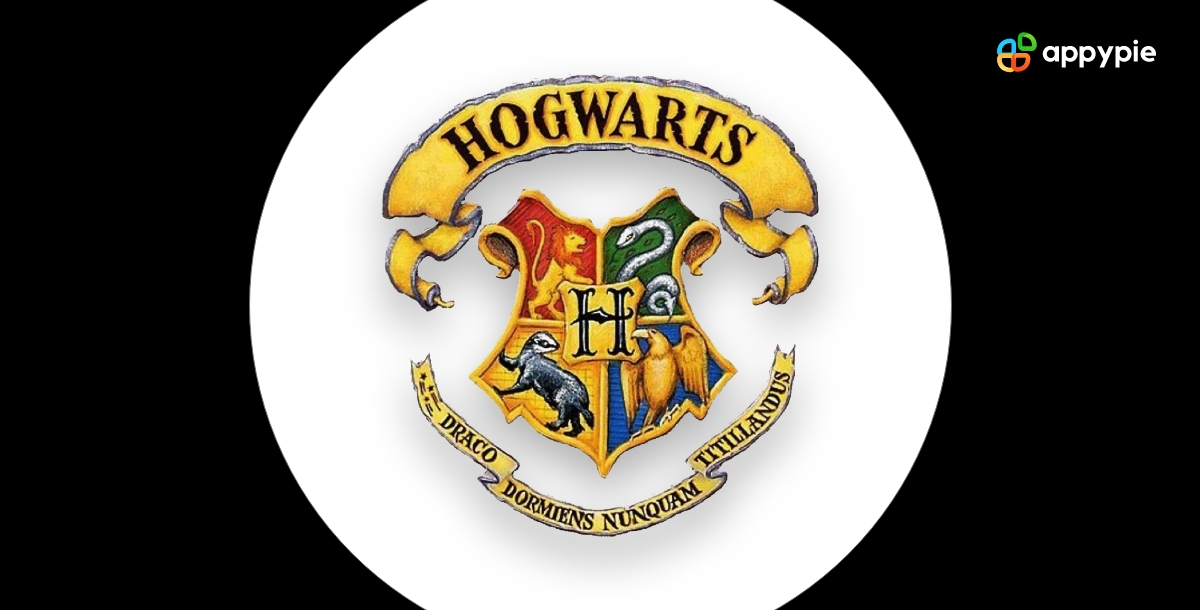 The letter “H” in the shield stands for “Hogwarts”, a school that was founded to spread magical knowledge to each student with talent. So, a term like Draco represents how powerful the institute is. Draco means Dragon in Latin, whereas in Geek, it means serpent. The deadly beasts symbolize mystical knowledge. Therefore, in order to warn students, the school selected a slogan “Draco Dormiens Nunquam Titillandus” as the motto. The meaning of this motto is ‘Never tickle a sleeping dragon.’

Create your own Dragon NFT

How to create your own Logo with Appy Pie’s Logo Maker for Free?

You can create your own business logo or brand logo with just 3 simple steps using Appy Pie’s Logo Maker. All you will need to do is follow the following easy steps and you will be able to create a beautiful logo for your business in no time at all:

The Harry potter logo inspires creativity and plays a vital role in the series’ success. It clearly shows that a logo can actually make or break a deal.

So, if you’re also planning to design an impressive logo but don’t know where to start, we’ve got you covered! Sign up for our Appy Pie’s Logo Maker now and start designing. It’s as easy as pie. Click below to get started!