Bitcoin logo and its Crypto History: The Story of the Big Orange “B”

Bitcoin is a cryptocurrency and one of the most popular virtual currencies in the world. It doesn’t have to be backed by material resources like any other national currency such as Euro or US dollar. Instead, it is associated with a unique system which is called Blockchain. Santoshi Nakamoto invented Bitcoin in 2009.

Cryptocurrency is a digital currency not managed or regulated by any bank or government. When it comes to ordinary money, we all know it is stored in various banks; however, virtual currency is stored on the servers of different organizations. All information about Bitcoin is managed and saved in the Blockchain. Blockchain is a storage system similar to Google docs, Excel, or a notebook. Blockchain helps in storing the complete list of transactions made with cryptocurrency.

That was the basic information about cryptocurrencies. Now let’s discuss the most popular cryptocurrency in the world, i.e., Bitcoin. It has become a synonym for digital currency, and anyone worldwide can recognize the logo of Bitcoin. So even for those who barely know cryptocurrency’s meaning, the Bitcoin logo is a known thing.

The Evolution of the Bitcoin Logo

The Bitcoin logo has been updated twice, and the changes were quite visible both times. In addition, the design team twisted the graphics a little in order to reflect the importance of digital assets and the modern era. Let’s explore the updates of the Bitcoin Logo further in detail.

Santoshi Nakamoto is the invulnerable brain behind Bitcoin, who disclosed the first logo of Bitcoin in 2009. The logo was a golden coin on which the initials of Bitcoin, i.e., BC, were inscribed. Santoshi Nakamoto created this version to represent Bitcoin’s counterparts in the real world. It was just like skeuomorphism philosophy. It helps ensure the mimic of digital things in physical counterparts in terms of design. 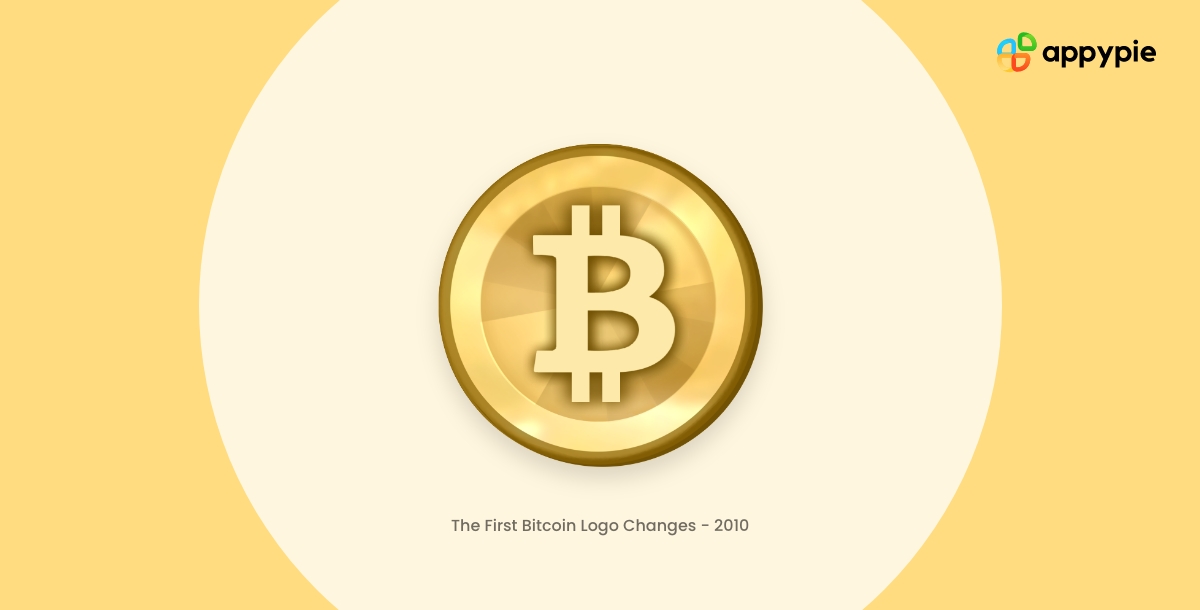 The first update came into existence in February 2010. This time the gold Bitcoin logo was inspired by the US dollar signage. Though the gold coin was the same, a stylized B was engraved in the center. However, unlike the US dollar, there were two strokes in B. Also, the strokes were not crossing the symbol B but coming out from the top and bottom, which was another difference from the dollar sign.

With mixed reactions to the first change to the Bitcoin logo, the logo was updated again in November 2010. One of the forum members, Bitboy, has updated the last logo a little. This time, refining the gold Bitcoin logo was inspired by the MasterCard logo. The B was asymmetrical this time, made its white color, and placed it against the orange background.

The Reason Behind the Success of the Bitcoin Logo

When people look at the Bitcoin logo, many don’t know why it’s so successful. However, designed to replicate an Avatar profile picture, this started out in 2009 as an open-source project led by a developer called Satoshi Nakamoto who managed to come up with a concept from scratch. As soon as the logo was released, it was picked up and actively used as a mark of brand that signified crypto currency. It’s Called the “Decentralized Crypto Currency”. Just like cellular service providers use a specific WiFi model that normally displays the provider’s name, this is very similar in nature allowing the use of Bitcoin wallets with nominal to no fees.

What is the Significance of Colored coins of Bitcoin?

According to the official website of Bitcoin, ‘Bitcoin color is derived from the alpha channel of an inverted Bitcoin logo. By inverting it and then adding a gaussian blur we are able to create a strong visual effect. Of course, there’s nothing special about this specific color correlation, any other colors would have worked just as well.’ It is interesting that the bitcoin logo was chosen so that the colors are essentially opposite. The colors of the bitcoin symbol were once white and were changed because they were too difficult to print in small sizes. The colors were changed to orange when bitcoin was open-sourced and white again in 2015 when version 1.0 was launched.

What is the difference between an NFT and A bitcoin?

From a technical point of view there are various differences. But from a pragmatic standpoint not many. These might be most notable. NFT uses Nakamoto Consensus; and there is no standard path to “mining”. Bitcoin’s proof of work confirms transaction orders. NFT is more scalable, with specific proof shapes. NFT uses quantum computing resistant signatures, whereas the blockchain system using ECDSA and secp256k1 protocols. NFT provides “attachment-based identity” for digital assets. Reference client and server distributions are on npmjs.com. NFT are stored within Offchain in various crypto-exchanges. The NFT client works with the NanoWallet SDK through libraries called NEOxSDK, Gendel and Lufi.

Can’t see any difference between Bitcoin and NFTs until or unless you physically own Bitcoins. NFTs are simply making use of Blockchain proprietary Ethereum (which seems to be getting popular these days with conferences around it happening all over the world recently, to create special “platforms” on top of Ethereum which replicate non-digital entities like objects/properties, etc – this is where Cryptokitties comes in whereas Bitcoin has been so far ahead of many new upcoming projects that are doing similar things using their own BTMs customers’ attention.

Creating your own logo online using Appy Pie’s Logo Maker is really simple and easy. With our easy-to-use interface, you can easily create your own logo with your own brand name or company name in just 3 simple steps.

When it comes to the Bitcoin logo, distinct, relevant, versatile, and classic are a few words that describe it. So that is the primary reason why the Bitcoin logo quickly became one of the most recognizable logos. Also, the Bitcoin logo’s excellent quality helps make it suitable for every marketing medium.

However, always keep in mind that Bitcoin is a volatile asset. So, before investing in it, it’s essential to seek expert advice in order to avoid any money loss.

Creating a recognizable logo is what you need in order to create a brand. However, the good thing is that you don’t have to be highly skilled in graphic design to achieve that. Yes, you heard it right. You can easily create your own logo with our free logo maker.