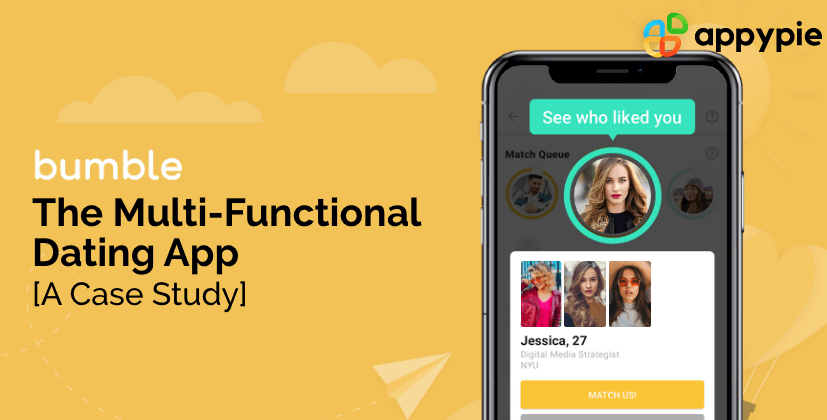 Bumble was released in 2014 as a dating app and an alternative to existing dating apps such as Tinder and OKCupid. Bumble has been a woman-centric dating app since its release and provides several unique features giving women more control on who they want to talk to. However, Bumble is a multi-functional app. Before we explore that aspect, let us begin this case study with a few statistics –

As mentioned earlier, Bumble is a multi-functional dating app. Apart from dating, it provides two other modes. These modes are what make Bumble multi-functional. Let us discuss all three modes that Bumble provides for its users.

Bumble Date is the normal version of the app. The app brings a few new features to the online dating scene. In Bumble, women have to make the first move. In the case of same-sex matches, however, anyone can make the first move. Apart from the woman-centric angle, Bumble also provides for more profile customization than Tinder but loses out to apps like OKCupid.

Bumble’s multi-functionality didn’t become a thing until 2016, when it first introduced the BFF feature. This was Bumble’s first foray into a multi-functional app territory. Bumble combines the thrill of a dating app and the simplicity of Facebook to create a multi-experience for its users. With Bumble BFF, one can make friends no matter where they are.

The feature ended up being quite popular because Bumble reports reveal that almost 90% of users have tried the BFF feature and they use it regularly.

After the success of the BFF mode, Bizz was the next logical thing for Bumble. Since 90% of users have tried the BFF feature, according to Forbes, BumbleBizz was simply the next logical step. According to co-founder Whitney Wolfe, Bumble wants to help facilitate the key engagement points in people’s lives: “love, friendship, and networking.” Users will be able to create a separate profile for professional swiping, but the basics of Bumble will still be the same.

If it’s a same-sex match, either party can send a greeting, but if it’s a match between a man and a woman, the woman will have to make the first move. Wolfe sees this as a chance to keep the app on message — “when there’s a chance to level the playing field,” she says, “we’re going to take it every time.” While not as wildly successful as BFF, Bumble Bizz remains a popular mode within the app.

How Did Bumble Develop So Many Different Modes?

The answer is fairly simple — they’re really not changing much. Since Bumble’s ultimate goal is to facilitate relationship building in all aspects of its users’ lives, BumbleBizz isn’t about changing the way the app works. Rather,, it’s about facilitating the growth of yet another kind of relationship, and empowering its female users in the process.

Bumble’s secret to creating a successful, versatile, multifunctional app was to recycle all its previous functionality around a new idea. In BumbleBFF and BumbleBizz, users still swipe and still have 24 hours to message. And rather than building new apps for each, Bumble simply allows users to toggle between functionalities in the original app’s settings. The result? Minimal effort on the part of developers, but maximal results when it comes to the user experience. The app is diverse and intuitive, and makes a clear effort to respond to consumer needs.

Other Multifunctional Apps to Look Out for

Of course, Bumble is hardly the first multifunctional app to hit the market. Plenty of other social media apps have expanded their capabilities beyond their original purpose — take Facebook, for example. Originally a space for university students to connect on the web, Facebook has become a multi-purpose platform for users around the globe, providing a diversity of features from gaming apps to online calling software.

Plenty of other apps are following suit. Instagram, for example, has a chat feature, allowing users to share and discuss photos privately. Snapchat offers everything from news features to private chats, and even allows users to send each other money for a short time. And when users get sick of the mainstream dating apps, there are a variety of dating apps that offer their own unique sets of features.

If you have an idea for your multi-functional app, you can start working on it today.

How to Create a Multi-Functional Dating App

That was our concise case study on Bumble and its various multi-functional app modes. Leave a comment and let us know what you think about Bumble’s different modes!