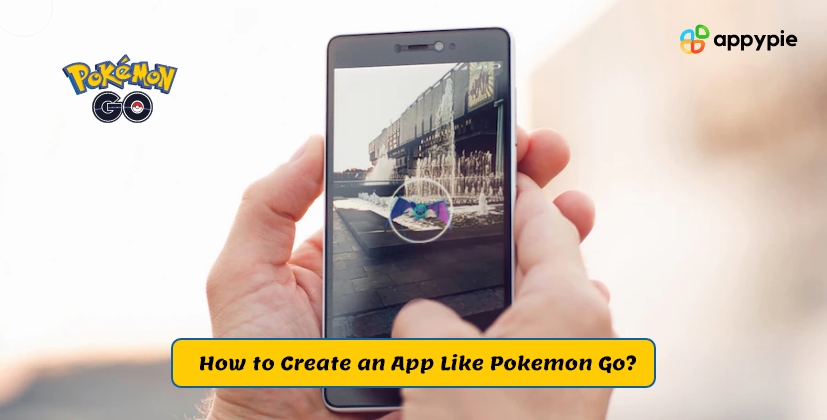 Gaming apps have often been criticized for encouraging a more sedentary lifestyle. This is because video games can be pretty engaging and may require the player to sit in one palace for hours. Here’s where Pokémon GO is completely different from the other popular games. Games like Pokémon GO require the players to move around while browsing the screen. And as expected, the game became a massive hit.

By 2024, there will be about 1.7 billion mobile augmented reality (AR) user devices worldwide. 88% of midsize companies use AR capabilities for numerous purposes.

This presents a great opportunity for entrepreneurs and small businesses. However, the costs and time limitations often discourage them from making their own app. Appy Pie presents itself as the perfect solution for small businesses looking for affordable no-code affordable solutions that need very little time to build an app from start to finish.

What is Pokémon GO, and how does it work?

Pokémon GO is a location-based AR gaming app where the player or the app user is the main character and must search and capture the in-game characters.

The players have to gather them and coach or train them to fight. Mobile games like Pokémon GO went viral because of their unique ability to offer an AR gaming experience to the players without any heavy equipment and paraphernalia.
Another way the players can engage with fellow players is by joining one of the three global teams to fight for territory.

After downloading the Pokémon GO app on a device, the players can create their own persona and access animated earth map data, but with the actual names of the streets and areas hidden. The locations also feature real-world objects associated with the specific Pokémon. As players walk around, the main characters in the game replicate their movement and the path in the virtual world. While walking around, the players may randomly encounter Pokémon, capture monsters, and add them to their collection.

The popularity of the technology is further demonstrated by the projection that 75% of the global population will become active AR users by 2025. Mobile games like Pokémon GO gained popularity because of the unique features added to the app.

For the longest time, small businesses and entrepreneurs have not thought it was possible to create an app for their business, primarily because of the money, time, and skill constraints. However, you can create AR games like Pokémon GO with a no-code app builder like Appy Pie.

Create an AR gaming app like Pokémon GO
✖
Get the latest
Updates, Information, & Trends
directly in your inbox