Everything You Should Know About In App Referral Programs

In theory, referral program is one of the easiest ways to widen your user base in a simple and efficient manner. However, like most other marketing programs, this too needs proper planning and strategization. It is in the absence of careful planning, attention to details and updating the strategy according to the app’s growth that has led to many a company failing miserably at this simple marketing program.

This concept is not entirely new. Through the ages we have looked for referrals and have valued the suggestions or recommendations that come from our friends and family and this is exactly what has inspired the concept of an in-app referral program. The concept of referrals may have given birth to these programs, but they have evolved in tune with the changing times to better suit the businesses and the end users.

An in-app referral program helps generate an awareness about the app by bringing about a growth that is viral, but entirely organic. One model that has worked quite well in the past is incentivising the users to share the app content with all their contacts and crediting them once this contact has either downloaded the app or performed some kind of an in-app action like making a purchase.

How to make your in-app referral program a success?

Once the link is generated for the user, they can easily share it with their network of people whom they want to refer the app to. These referral links can only be used effectively if they are easily shareable. This shareability can be enhanced when the links are in the format compatible with all the major social media apps or other apps that they may be using for sharing like SMS.

When you have the tracking information mentioned above, you would be able to get some interesting insights about the users who are turning out to be the most influential referrers. This means you would be able to nurture these particular users and retain them for longer, while allowing you to encourage them to keep extending their influence, to your advantage in increasing the popularity of your app.

Once the system for dissemination of incentives or benefits is in place, there is a need for an easy to use system for redeeming them. This redemption should be easy and hassle free without the users having to jump through any hoops. Ideally this process should only take one or two clicks maximum for the user with least friction between them and the benefits.

This is not strictly an essential, but an amazing value addition to your referral program. It is a great idea to create a personalized onboarding flow for the referred users and give them a special experience that they will cherish. This adds on to the referral with a positive experience.

Typically, the problems emerge when the companies start off by incorporating only a few of these features and then get stuck during their growth curve as they feel the need for the rest of them.

The terminology of in-app referral program

For someone who has just been introduced to the concept of referral programs, there might be quite a few words that need more explanation. Here’s a comprehensive list of terminology that you must acquaint yourself with, before delving deeper.

It is important to understand the full impact of any marketing program that you may have in the pipeline. The in-app referral program has enough benefits in it to make you fall in love with it.

In-app referral programs offer the potential users an innate trust quotient which comes from the fact that it has been referred to by a friend or family who they trust. This tends to create a community of users and its foundation lies in the trust they have for each other, and the app. Most of the users or the potential users look for social proof and approval before deciding to use it themselves. In app referrals go a long way in dispelling this fear or innate need of recommendation from trusted users and encourage them to use it themselves. It is a great strategy to first acquire some users and get them to like your project, then offer them rewards and deals in exchange for a recommendation.

How to develop an in-app referral program for a start up?

While there are numerous examples of industry bigwigs who have benefited greatly from a well-designed and well-implemented in-app referral program, but what does a start-up app do to gain from this program.

A loyal customer base is instrumental in this particular strategy. When you target the whole customer base, you might not defeat the purpose of this whole exercise which is to increase the customer base. Target only those customers who are the most active on your app as they would look forward to sharing your app and their experiences with their friends and family.

Like any other marketing plan, the success of in-app referral programs too is heavily dependent on the timing of the release. If you decide to opt for the in-app referral program a little too soon in the life cycle of your app, there is a good chance most of the users haven’t heard about it and hence the probability of them going for it is really thin. The loyal customer base who have been engaged with the app form the baseline and are the main proponents for you. The benchmark for this number varies from one industry to the other. Another factor is the exact days that you run your campaign, e.g. it has been observed that iOS app users tend to download new apps on the weekends while the reverse is true for the Android users. It is important to keep an eye on such insights to time the release of your campaign well.

More often than not, the promotion of your in-app referral would bring in an avalanche of app downloads, hence it is of great importance that the level of user engagement is not only anticipated but analysed as well with the help of a series of quality checks. Listed hereunder is a list of quality checks that must be performed while you launch your in-app referral program.

In case of referral programs if you fail to follow up, you essentially leave the program incomplete and lose out on gaining the entire benefits that might have made their way to you. Ideally this should not come off as a spammy effort and only lightly nudge or subtly remind them of the offer. You can choose to send out emails or push notifications or both to the users wherever a referred user comes on board spreading positivity. A notification or an email can share the incentive history encouraging the users or share the important dates or deadlines while letting them know that you miss them.

At the end of any marketing campaign it is important to sit down and analyse the results and measure its impact. An in-depth analysis of the results need to be conducted of various parameters like the number of invites that were sent out, the number of clicks, the number of downloads, and the total revenue that was generated by the campaign. It is the genuine parameters that need to be analysed instead of just the vanity numbers.

How did they do it – top case studies & examples

In the panorama of the app world, the word of mouth publicity or the referral programs have proven their worth repeatedly in pushing up the number of downloads. Four of the success stories that truly stand out in their application of in-app referral program are Uber, Dropbox, Evernote, & Airbnb. Let’s look a little deeper and figure out how they did it?

They became such a revered success story that most of their competitors and other players in their category adopted this technology in an effort to gain consumers and ride up their app downloads. They have two referral programs running parallelly one for the riders and the other for drivers. 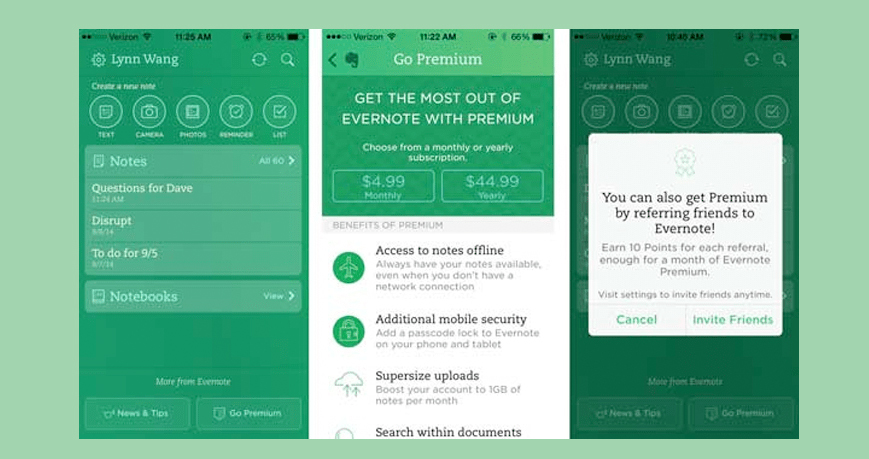 With a 100 billion rich user base, Evernote a billion-dollar app has also released a double-sided referral program. The rewards are plenty for both, the referring user and the referred user. The referring user wins points that may be used to acquire premium subscriptions or raise the limit of their monthly upload capacity. The new signees or the referred users are offered the premium version of the app for free for a month. 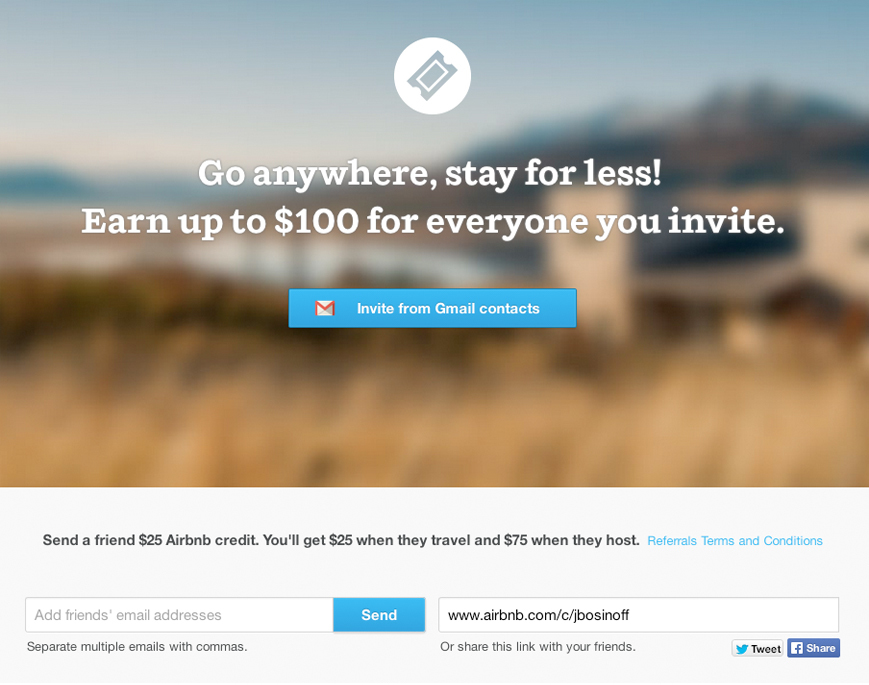 It is your satisfied and loyal customers who would be the proponents of your referral campaign, hence make sure that you have a big chunk of them and can take advantage of them in entirety. It is easy to get impatient when you are just starting out, but in the initial phase of your app, your focus needs to lie on getting as many loyal customers as you can. When you do decide to launch your campaign, make sure that you conduct intense A/B tests for your referral schemes. Make adjustments to reap in as many benefits as you can, from the campaign.

What kind of app do you have in mind? You can now create any app you like, without learning coding or spending hundreds of thousands of dollars. Once you have the perfect app, it’s easier designing the most beneficial in-app referral program.
Create an app now!

What would your favorite in-app referral program look like? Let me know in the comments section. I’d love to hear what you have to say!