How did Elon Musk make his money? [Elon Musk Net Worth] 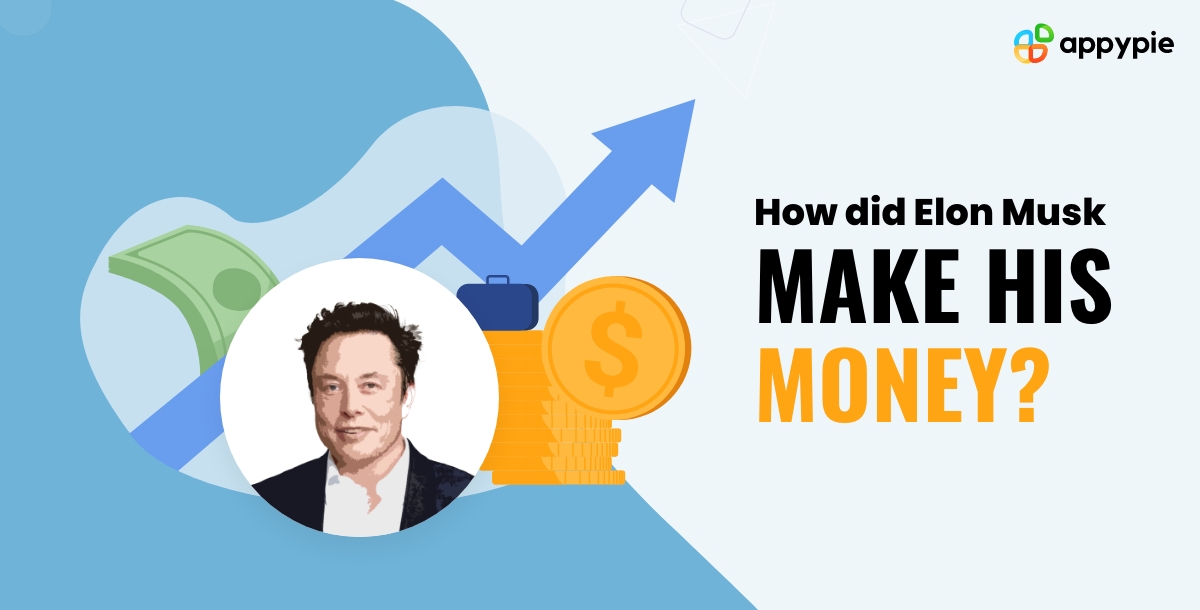 We’ve all heard of the billionaires who weren’t born with a silver spoon in their mouths. Men like Steve Jobs, Bill Gates, and the controversial Elon Musk weren’t born with money but found their own ways to make billions. While some found one brilliant idea and took it to great heights by building a gigantic company, earning billions, others followed Warren Buffet and made a series of low-risk, long-term investments waiting patiently for money to turn into wealth.

However, there is a third way – the Elon Musk way. Like everything else in his life, he made his billions in a completely different way. He did not put all his eggs in one basket. He had several good ideas and chose to take up a select few risky, almost crazy investments instead of several wise and safe investments. What everyone saw as crazy, risky steps were what he would call organized chaos. Naturally, he has been doing something right because a series of these decisions led him to become the richest private citizen in the world.

Though it may seem like something straight out of your dreams, it is possible to make millions just by creating an app. You can read all about the young app developers who made millions and see how you can get started with your millions.

Elon Musk’s net worth in 2022 stands at $228 billion. The Tesla CEO and Space X founder, Elon Musk, comes from a well-off family. He had an interest in and knack for computers, and he designed his first video game at the age of 12.

At 17, he relocated to Canada to escape serving in the military for South Africa’s apartheid regime. Here, he joined Queens University in Ontario and transferred to the University of Pennsylvania, where he attained a dual degree in Physics and Business. His entrepreneurial instincts led Elon and a few of his friends to rent an off-campus house to run a nightclub.

Even though he enrolled in a Physics Ph.D. program at Stanford University, he dropped out in two days. This was the time when aspiring entrepreneurs were beginning to acknowledge the potential and seriousness of the Internet. Musk was among the first ones to understand that it was more than just a plaything for nerds. With his brother Kimbal, he founded Zip2, a company that offered an online business directory that was like the yellow pages but with maps. It might not seem much today, but it was a pretty big deal in the mid-nineties.

In 1999, they sold Zip2 to Compaq for $307 million, and $22 million went directly to Elon. Another memorable detail about the sale was that Musk spent $1 million of this money on a supercar but invested the rest promptly into his next venture. 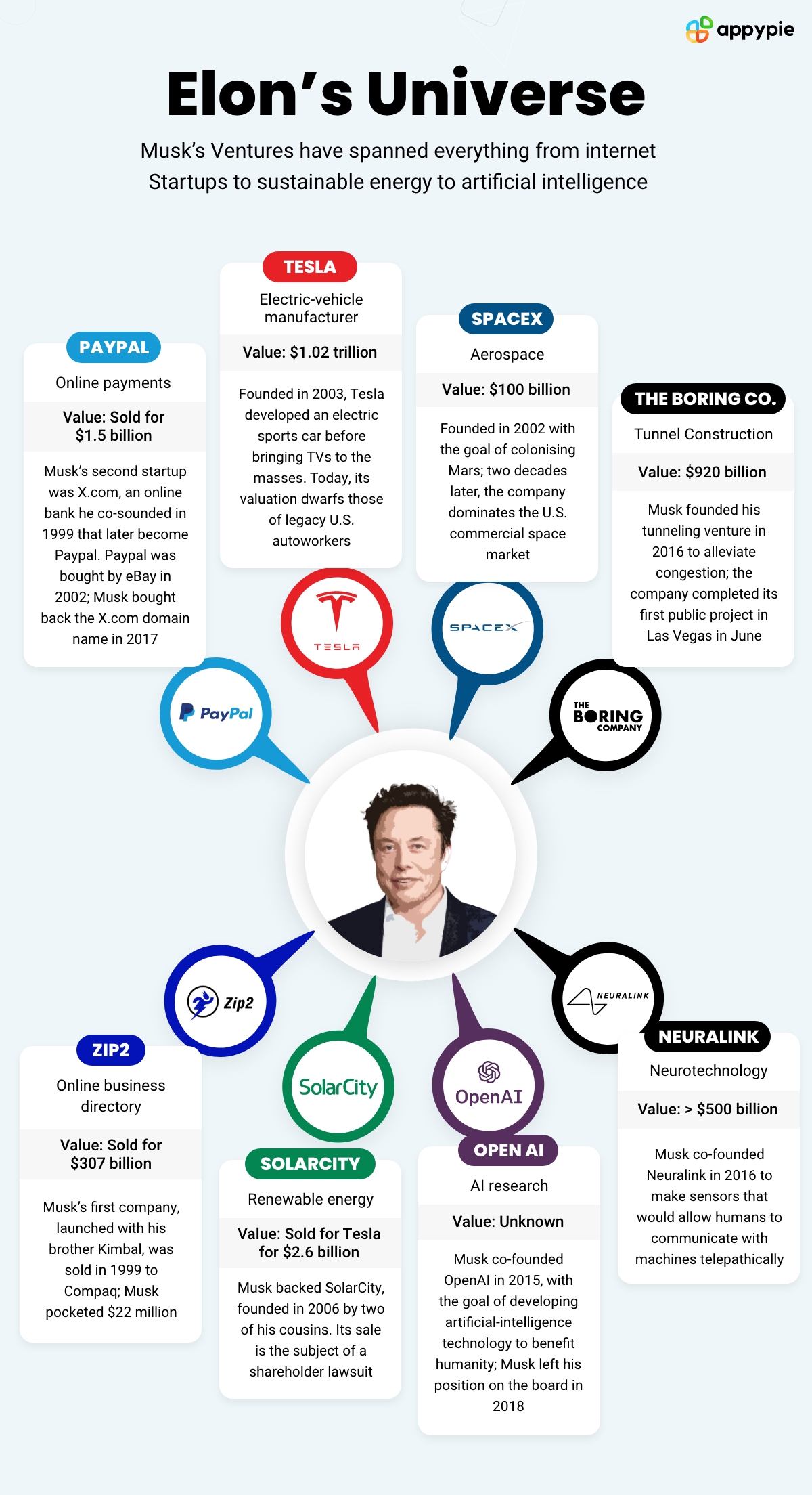 Only about a year later, Elon crashed this car as he tried to show off its acceleration and launched it into the air. Elon and Peter Thiel were in the car at the time of the crash but were unhurt as the uninsured million-dollar car was trashed. The two later merged their respective financial startups, Confinity and X.com, in March 2000 to form PayPal, with Musk as the CEO. He was soon fired in September from the board over a dispute about switching the company’s servers. Still, when eBay bought PayPal in 2002 for $1.5 billion, Musk netted about $180 million from the deal.

This multimillion-dollar deal didn’t deter Musk from moving forward to new projects. In 2002, he founded SpaceX with a mission to colonize Mars. In 2003, he dunked about $6 million into Tesla, which did not even have a single car ready. The company at the time was just a couple of co-founders and a concept.

In the first few years, both these ventures faced trouble, and Musk confessed to having to push almost everything he made in the PayPal deal. While SpaceX suffered from successive launch failures, Tesla engineers realized there was a high probability that the battery pack prototypes would catch fire. Both these companies might have had to shut shop if these challenges continued. As the Great Recession hit the US and the rest of the world in 2008, Tesla almost went bankrupt.

Musk stuck to the grind, and eventually, it started paying off. Things started to turn for SpaceX in 2008, as a $1.6 billion deal with NASA came through. It was in 2012 when Tesla started producing the Model S – the first Tesla car that was fit for the mass market.

Today, SpaceX is the undisputed leader in private space travel, and Tesla is a juggernaut that has captured 2/3rd of the US electric vehicle market.

As two of his largest ventures are finding insurmountable success, Musk has not stopped investing in new projects. In 2016, Musk started two entirely different companies – The Boring Company and Neuralink. To put things simply, The Boring Company digs tunnels and Neuralink is into neurotechnology and both are worth hundreds of millions of dollars in 2022.

As Neuralink attempts to create telepathic interfaces using machines, and The Boring Company aims to revolutionize infrastructure, there is heavy speculation about the sustained success of either of them. But, taking high-stake risks has often worked out quite well for Musk, and he continues to do so.