6 Reasons Why Messaging Apps Are Popular 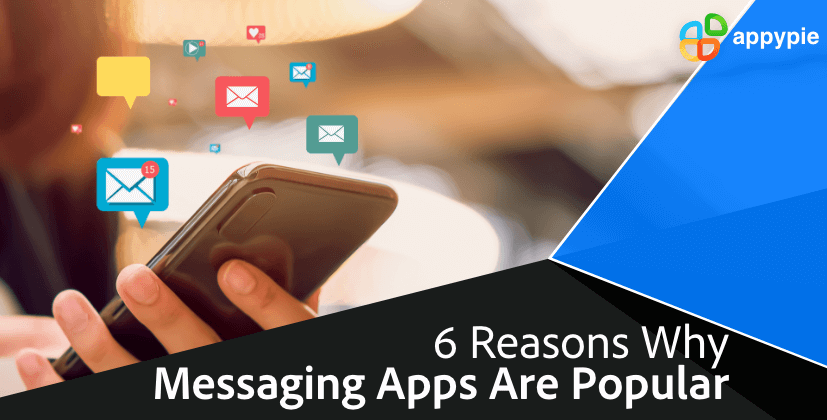 What makes messaging apps so popular?

Numerous chatting apps have gained recognition over the past decade and a half. Chatting apps closely trail social media apps in installs on the Google Play and the Apple App Store.

They have made a significant impact on all spheres of communication – business and personal. Their ubiquity adds to their utility, and they have all but obliterated MMS and SMS. If you want to create your own app here’s our guide on how to create a chat app. Let us move on and learn a bit more on chatting apps.

A Brief History of Chatting Software and Applications

The live chatting app industry evolved quite slowly. The first of its kind was ICQ Chat that was a desktop client for anonymous communication. The public was hooked on chatting using Yahoo and Google Chat by the early 2000s. It was one of the rare things that could happen smoothly over a 56-kbps dialup line of yore.

The emergence of Skype in 2003 was a game-changer. They showed the world how to create a messaging app with native audio and video support. Skype was also excellent at small file transfers – a feature that developers back then did not consider relevant for a chat app.

The live chat feature was adopted rather quickly by businesses to send a screenshot or reminder to another part of a building instead of picking up a phone or hand delivering it.

As smartphones became popular post-2010, apps like WhatsApp adopted the original ideas for a newer device and the industry has since followed making newer instant messengers such as Facebook messenger. These have become more well known over the software counterparts, however, the app versions of software like Skype continue to hold their own as a video conferencing solution.

There are hundreds of chatting apps out there. Some are specialized e.g. Slack for the workplace and Discord for gaming. If you want to build a real-time chat app, a niche is probably what you should aim for. Check out Appy Pie AppMakr if you want to create your own chatting apps. In fact, here’s a video to help you create a messenger and chatting app.

If you want to create your own chat app, you must know what makes the existing apps popular. Here’s a list of the best chat apps of 2020.

Judging by the number of installs, Messenger is the biggest chat app with at least 1.82 billion users as of 2017. However, that is not entirely accurate as it is installed by default with the Facebook app.

There is also a discrete install for both Android and iOS. The standalone version is available as both full-featured, and a lite stripped-down version.

If used with a 4G connection or fast Wi-Fi, the chatting apps also allow calls with quite decent clarity. International calling is free using a messaging app (apart from the meager data used). Considering the massive expense of international calling, it is no wonder that messengers are so popular.

Say hello to your friends, family, or boss using a video feed from the front camera. Video conferencing came to the masses with Skype and later WhatsApp. A video call brings family members who are apart, close together in a way that voice calls cannot.

The most significant disadvantage of SMS and MMS was the lack of backup. From time to time, various cell phone manufacturers introduced their own modules for extracting SMS and storing it on a laptop. Still, the file could not be migrated to a model from another company.

What lies ahead in the future for messaging apps

If you are questioning yourself how to make a messaging app that differentiates itself, the answer is easy to find.

Though feature-rich, most messaging apps could do with some improvement. The first and most essential is the ability to customize the app. Most of them are rather drab and lack adequate shortcuts.

The menu is likewise hard to understand for the average user. There are layers of sub-menus that hide essential privacy features.

Another useful feature would be a personal message tone for a particular contact and a large file transfer size of 250 MB.

It might seem there are too many, but it would be nice to have one that has all the features yet allows reasonable anonymity if required. Get on Appy Pie AppMakr for free and start creating your own chat app today!

Leave a comment and tell us what you think is the next big feature for messaging apps.