How To Test An App With TestFlight – A Complete Guide

TestFlight is a mobile application testing platform developed by Apple Inc. It allows developers to test their apps on iOS, tvOS, and watchOS devices. TestFlight makes it easy for developers to invite testers to a project and have them install the app on their devices. The developer can then monitor usage, collect feedback, and analyze crash reports from the testers. It also provides an easy way for developers to distribute new versions of their apps to existing testers.

It is an Apple-owned platform that allows developers to test their apps before submitting them to the App Store. The service was first introduced in 2014 and has since become the most popular tool for beta testing iOS applications. TestFlight is easy to use, offering developers a streamlined and simple way to distribute their apps and gather feedback from users.

Why is TestFlight important?

TestFlight allows developers to quickly and easily create a beta version of their app to be tested on both internal and external users. Developers can create a limited number of testing slots for each platform that they are targeting, and then assign those slots to specific users. Once the invitations have been sent out, testers can then accept the invitation and install the app on their device. TestFlight also provides a variety of tools to help developers track user activity and collect feedback from testers.

Types of users and their permissions

To begin app testing on TestFlight the first thing that you need to do is to upload the build on the platform and then add testers to the project. Depending on your requirements, testers can be broadly classified as internal testers or external testers.

Who is an Internal tester?

An internal tester can be any individual from your team in App Store Connect with Admin, App Manager, Legal, Developer, or Marketer role, and has access to your app. You can add up to 100 internal testers and every member of your team can test apps on up to 30 devices.

Who is an External tester?

An external tester is any user outside your team that wants to test your app. Moreover, they do not have access to your account on App Store Connect. You can add up to 10,000 external testers per app.

How to test your app on TestFlight? 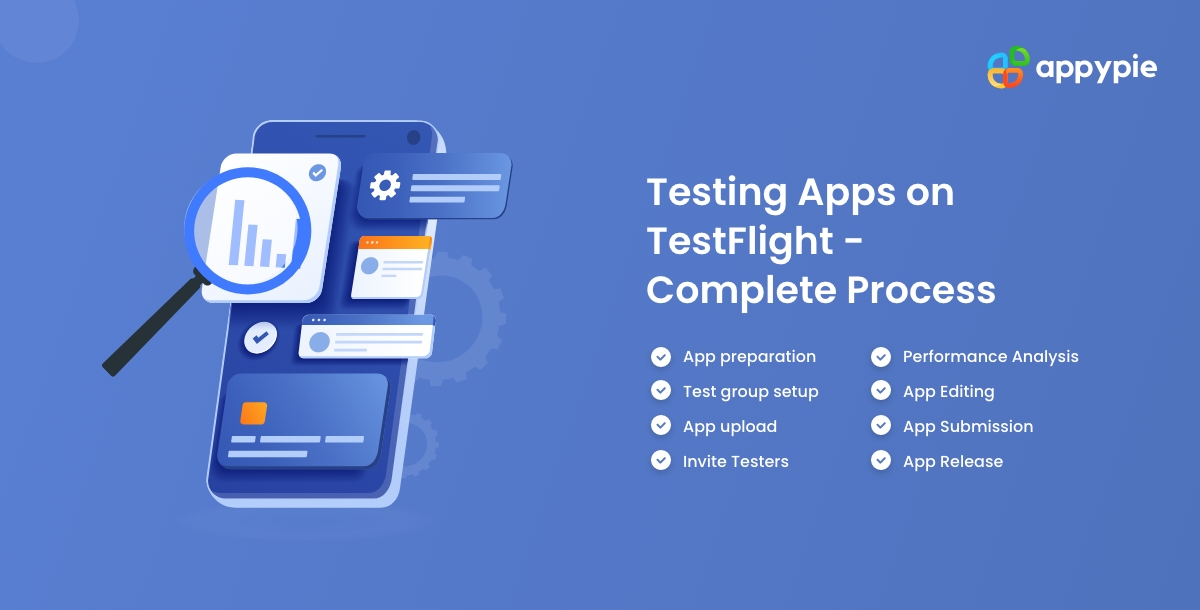 1. Prepare the App for Testing

The first step in the process is to prepare the app for testing. This involves making sure that all necessary files are included in the app, such as the icon, screenshots, and any other information that may be needed for the app’s listing in the App Store.

After preparing the app for testing, the next step is to create a test group of users who will be able to access and test the app. The test group should include people from different backgrounds, such as developers, designers, marketers, and testers.

Once the test group has been created, the next step is to upload the app to TestFlight. This can be done via Xcode or via iTunes Connect. During this process, the developer will need to provide information about the app, such as a description and keywords that will help users find it in the App Store.

Once the app has been uploaded, it’s time to invite your testers to start testing it. This can be done directly within TestFlight or by sending out an invite link via email.

As testers start using the app, it’s important to monitor its performance and keep track of any issues that may arise during testing. This can be done by using analytics tools or by manually tracking user feedback and bug reports.

Once any issues have been identified during testing, it’s time to start making changes to fix them. This could involve making changes to code, updating graphics, or adjusting user interface elements to improve usability and functionality.

Once all necessary changes have been made and all bugs have been fixed, it’s time to submit the app for review in iTunes Connect. This process consists of filling out an application form and providing additional information such as descriptions and screenshots that will help users find it on the App Store.

After your app has passed Apple’s review process, it is ready to be released on the App Store! Congratulations! You have now successfully tested your iOS app with TestFlight!

TestFlight is a powerful tool that enables developers to quickly and easily test their apps before they are released on the App Store. By following these steps, developers can ensure that their apps are of high quality and perform as expected when released. By testing their apps with TestFlight prior to release they can also save time and money by avoiding costly mistakes that might occur if they were not properly tested beforehand.