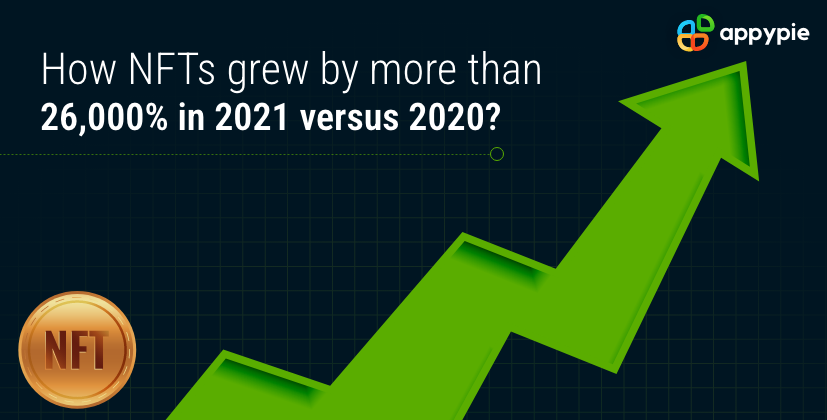 Everyone is talking about NFTs today, but what is NFT? NFT’s full form is non-fungible token – a non-interchangeable unit of data stored on a blockchain that can be sold or purchased.

An NFT can be any digital file like drawings, music, photos, videos, and more. However, NFT art is currently the flavor of the season for both sellers and buyers or collectors.

NFTs are unique, non-transferable digital assets stored in blockchain. When you buy an NFT using a cryptocurrency like Ethereum, you get a certificate of authenticity. This is why they are often used to prove the ownership of digital files. (Statista, 2022)

In 2021 alone, approximately $41 billion worth of crypto was spent on NFT marketplaces.

This unexpected ascent of NFTs in 2021 makes us a little forgetful of the tumultuous history of NFTs since the first one.

Do you know who created the first NFT?

It was Kevin McCoy who created the first NFT – Quantum in 2014. This iconic NFT is a pixelated octagon filled with a variety of shapes that pulse hypnotically. As NFTs became mainstream and ascended exponentially in 2021, we saw it sell for more than $1.4 million in a Sotheby auction.

Though we are talking about the big NFT boom in 2021, we cannot ignore the memorable peak in 2017 when NFTs went public. But first, what happened to NFT between 2014 and 2016?

These were the years of experimentation and development, especially on the Bitcoin blockchain-based platforms. This was also the time when Ethereum was only beginning its imminent reign on this emerging industry.

Initially, NFTs were common in the gaming community, and later, by 2016, the age of memes began. As Rare Pepes NFTs were released on the CounterParty platform, it suddenly transformed into a database of these alternative tokens. This was an entirely unintended outcome!

However, seasoned bitcoin users were not happy with the idea of filling up precious block space with tokens that represented ownership. This was when the shift of NFTs to the Ethereum blockchain began.

NFTs find favor with Ethereum. In 2015, as the platform went live, they announced some token standards that would allow developers to create tokens. The blockchains like Ethereum, which support smart contracts, often include token standards to tell people how they can create, issue and deploy new tokens on that specific blockchain.

CryptoPunks are an NFT collection of 24×24, 8-bit-style pop art pixel portraits. There are 10,000 CryptoPunks, each with a unique personality and a combination of randomly generated features, from traits to accessories. (Statista, 2022)

The rage around CryptoKitties actually clogged up the Ethereum blockchain with its extremely high activity levels. It was around 2017-2018 when people witnessed this phenomenon and realized how potent NFTs could be.

In 2017, CryptoKitties was the first NFT created on the Ethereum blockchain using the ERC-721 token standard. CryptoKitties sales unexpectedly rose in early September 2021 as NFT trading soared around that time. However, the interest in this NFT was focused around the first 100 CryptoKitties – the “genesis” line. This was because a popular NFT collector tweeted his purchase of a pair of these. (Statista, 2022)

The next significant phase was 2018-2020, when NFTs gradually started gaining the public’s attention, primarily due to NFT gaming and metaverse projects.

The market cap for NFTs grew nearly ten-fold between 2018 and 2020. In early 2021, an NFT digital artwork raked in $69 million – making it the third-most-expensive art piece ever sold from a living artist. This was also a time when the price of several cryptocurrencies grew exponentially, and interest in crypto and blockchain reached new heights. For example, the price for a single Bitcoin hit an all-time high of $60,000 in March 2021. (Statista, 2021)

The first massive NFT activity was recorded in December 2017 and was connected to the wild rise in the popularity of CryptoKitties and the second moment, in March 2021, was due to the media reporting the largest NFT sales. The third time this happened was when the NFT trading activity more than doubled between July and August 2021. During this period, the number of unique wallets grew by 185,000, bringing the total to 280,000. (Statista, 2022)

Irrespective of the nature of technology, change is a healthy constant. Now that we are in 2022, NFT as an industry has become a lot more structured. Today, there are established marketplaces like OpenSea, Rarible, etc., for listing, trading, and buying NFTs. 2017 also saw the release of ICOs, and people made a beeline for it.

In 2021, OpenSea’s all-time trading volume was three times higher than Axie Infinity. However, not all marketplaces are the same. For example, Axie Infinity, NBA Top Shot, and Decentraland are gaming NFTs that bank upon collectibles or metaverses. OpenSea and Sushiswap work like decentralized exchanges where anyone can go and buy or sell NFTs or cryptos. Cryptopunks and Solanart cater to the most popular NFT category – crypto art. (Statista, 2022)

OpenSea overtook UniSwap by January 2022 in terms of usage on the Ethereum blockchain. Why is this significant, you ask?

UniSwap is the world’s largest decentralized exchange (DEX) on Ethereum, whereas OpenSea focuses on the sale and purchase of NFTs. It means that people on Ethereum are more interested in trading NFTs as compared to cryptocurrencies. (Statista, 2022) 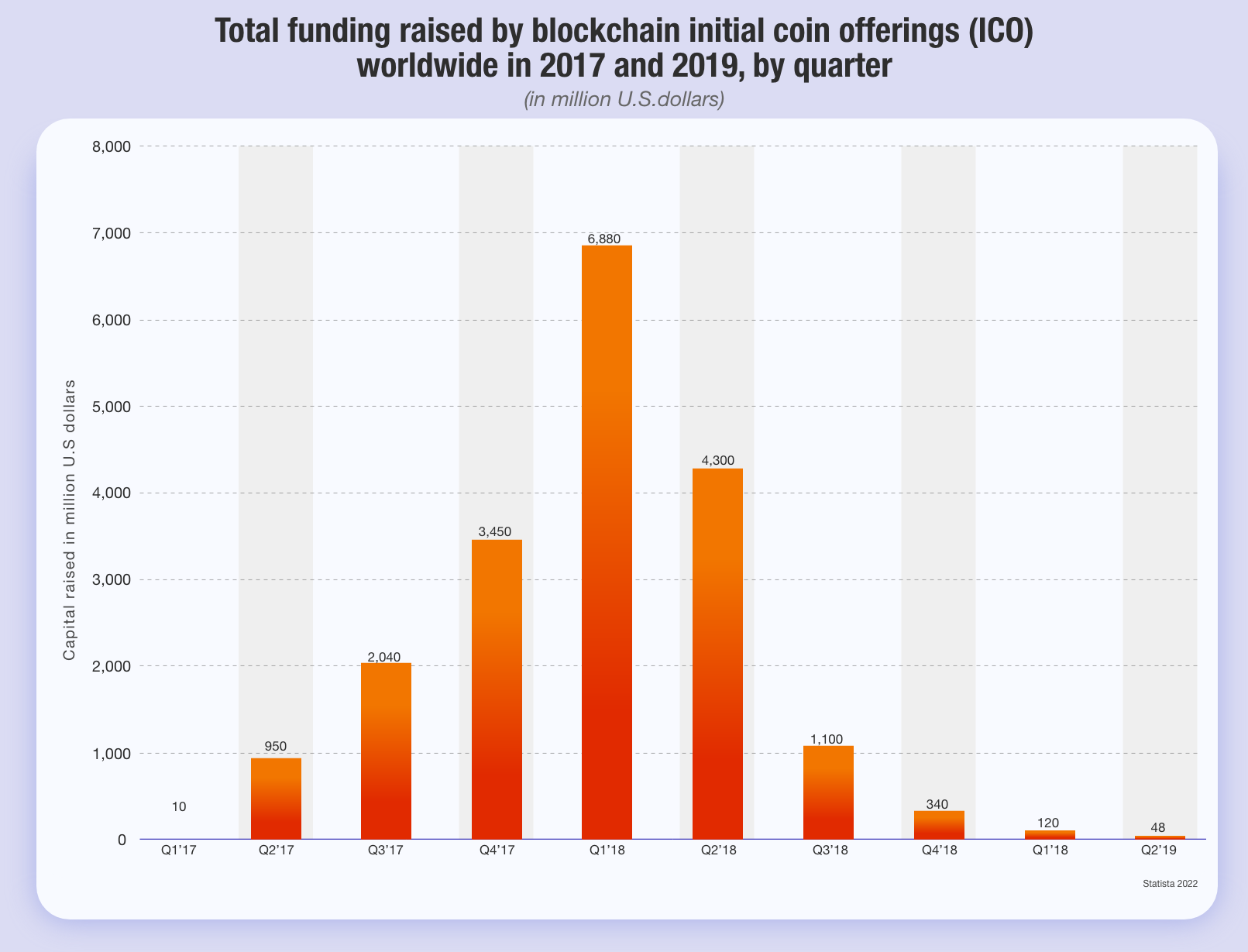 As you can see in the graph charted by Statista above, the funding achieved through blockchain ICOs reached its peak in Q1 2018 at $6.88 billion. (Statista, 2022)
The ICO categories vary from year to year, but investment in blockchain infrastructure is a constant. Between 2016 and 2019, 1676 token sales were completed, amounting to a total of about $ 29.2 billion.

Let’s talk about DeFi protocols for a bit here. DeFi protocols increasingly generate more money. In fact, the video game Axie Infinity generated a revenue of more than $300 million in August 2021. The increase is of such significant proportions that the protocol revenue for Opensea was ten times more in August 2021 than the previous month. So what is this protocol revenue we are talking about? Protocol revenue is the fees taken directly by the protocol and the token owners, which is different from the supply-side revenue, which is the revenue given to those who use the protocol. (Statista, 2022)

Who is buying NFTs?

We have talked about creating, listing, trading, and selling NFTs. Now, let’s pay attention to those who buy NFTs. Let us begin with the countries where NFT is most popular. Would you believe that the top five countries with the biggest NFT adoption are in Asia! Curious about the names of these countries? Leave a comment below, and I will let you know!

As per several global Google Surveys held in September 2021, NFTs were especially popular in Southeast Asia and Latin America. However, it is suspected that the high percentage observed in some countries may be caused by online games where people can earn money by playing the game. (Statista, 2022)

Only about one in 10 Americans invested in NFTs in early 2021. 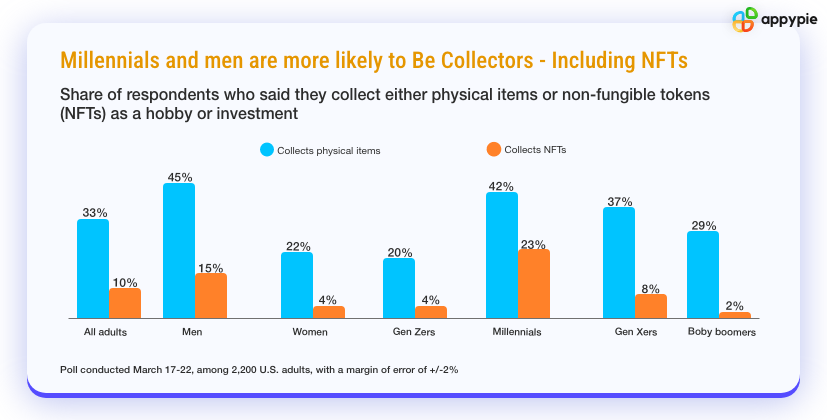 Information about how often people from around the world were searching for the keyword “NFT” was compiled through Google Trends, and it was discovered that consumers from Asia and Oceania were more interested in NFTs compared to consumers from Europe and Latin America. (Statista, 2022) 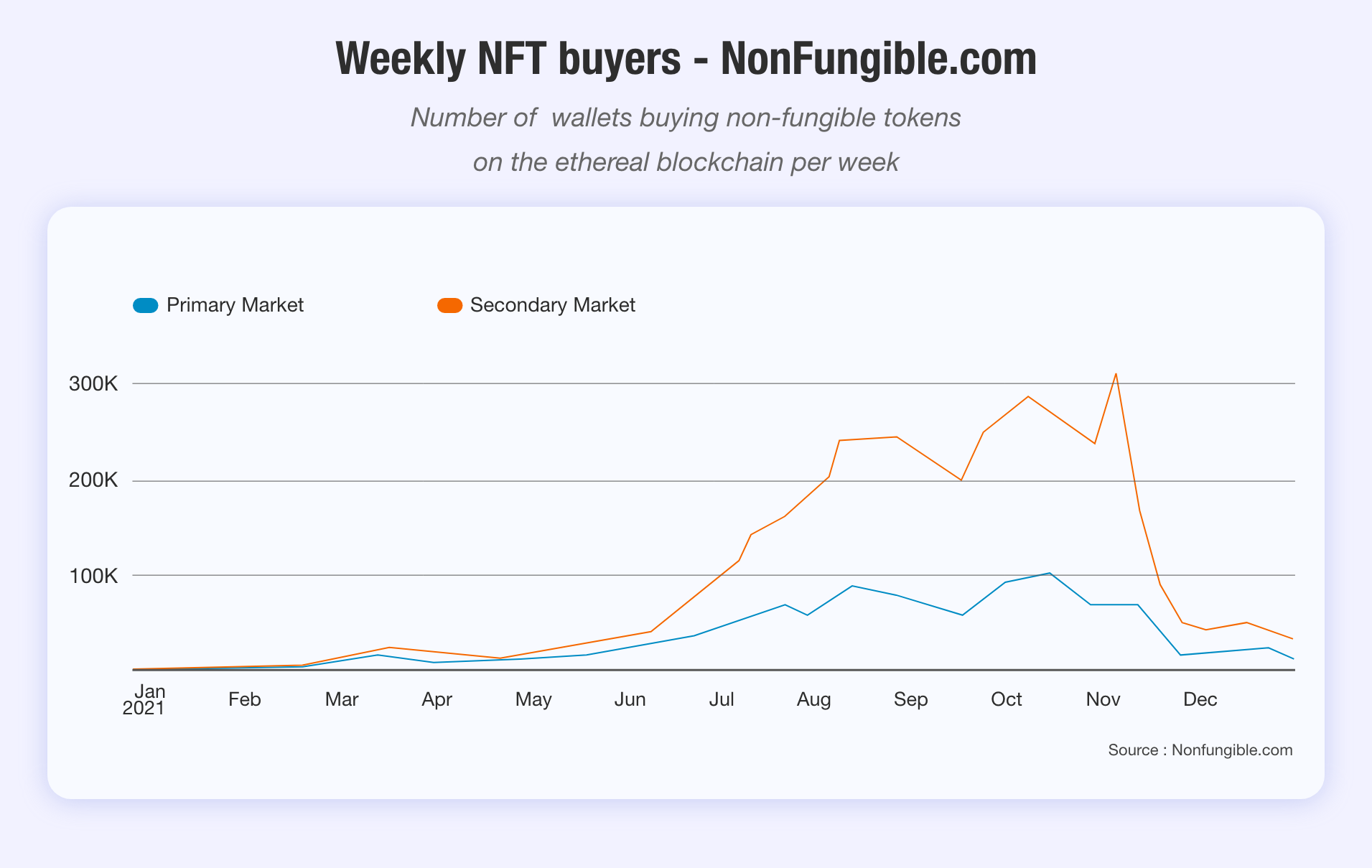 That’s excellent advice! But just for fun, let’s look at the 100 most expensive NFTs ever sold.

What is the most promising NFT?

Though there are several different reasons why the US population invests in NFTs, one common reason across generations and genders is – the return on investments. (Statista, 2021)
The concept of investing in NFTs is relatively new. Hence, the average Joe may struggle with choosing the right NFTs for investment. Here is a curated list of the most promising NFTs just for you!

As the Philippines made the earnings from Axie Infinity taxable, the NFT game has seen its popularity decline. However, most of the games in the Metaverse have seen an appreciation. Among the ones that top the charts is the NFT metaverse Alien Worlds whose player count has reached the combined count of Galaxy Blocks and Splinterlands. (Statista, 2022)

Yes, we all love to talk about the NFTs that earned millions of dollars as they went on the market, but let’s help you do a reality check. According to recent research conducted by the artist Kimberly Parker and an anonymous data scientist, 53.6% of NFTs sold on OpenSea in March 2021 were sold for less than $200.

Now, if you thought that was ridiculous, here’s another doozy! You may have to pay about half of that $200 in minting and selling your NFT! The average cost hovers between $70 and $120. However, people have been known to spend thousands too!

As the underlying technology is blockchain, creating NFTs can be expensive. This is where no-code platforms have found their opportunity.

The transactions started increasing in numbers and complexity post-2020, and between September 2020 and March 2021, the Ethereum network fee grew by more than 300%. (Statista, 2022)

Appy Pie has a singular mission to make cutting-edge technology affordable and accessible to businesses of all sizes and scales. Its no-code NFT generator lets you create NFTs in minutes without the need for any tech intervention.

Make your own NFT

What are people doing with their NFT purchases?

As per a recent research by the Financial Times and Chainalysis, there are about 360,000 NFT owners worth about $2.7 million. However, around 9% of them account for approximately 80% of the market value. (Financial Times)

The majority of the NFT investors who are new to the field are still trying to figure out how to use their NFT purchases in the best possible manner. Hence there is a kind of hesitation and lack of understanding of the right time to sell. This is why most of these investors are yet to recoup their investment in NFTs.

The uncertainty around NFTs has encouraged most investors to buy collectibles that they feel connected to.

Do NFTs go up in value?

There is a certain amount of speculation and the air of rarity around NFTs, which indicates that NFTs have the potential to increase in their value. This is why we often see the resellers making a handsome profit by selling their NFTs at a much higher value than the cost price.

However, this increase in value is subjective and depends on the buyer’s perception. This is pretty similar to how the physical art world works, where the value of an artwork depends on how valuable the buyer perceives it to be.

The floor price of NFTs reached its peak in September 2021 and was ten times higher than the figure in early June 2021, indicating that NFT trading became extremely popular during that time. (Statista, 2022)

Types of most popular NFTs

NFT projects in art and gaming were worth several millions of U.S. dollars in 2020 already but were still much smaller than figures in 2021. (Statista, 2022)

In 2020, the gaming segment accounted for roughly 23 percent of the total sales revenue in the NFT market. In the same year, the art segment sold only 64.5K units, and it reported slightly higher sales revenues than the gaming sector. (Statista, 2021)

Splinterland experienced a surge of popularity in September 2021 as it saw an increase in sales volume. However, it is based on the basic play-to-earn model, where players earn cryptocurrency by playing the game. The game is different from others in one critical manner – the game does not run on the Ethereum blockchain but Hive. (Statista, 2022)

There has been a fair amount of concern regarding the environmental impact of NFTs. At the moment, Ethereum consumes 44.94 terawatt-hours of electricity, a number that equals the annual power consumption of countries like Qatar and Hungary. (CBS News, 2021)

So, what is the future of this alarming impact?

Naturally, there has been some serious research in this field, and there is hope at the end of what seems to be a very dark tunnel.

If the current proof-of-work model of Ethereum is turned into a proof-of-stake model (Ethereum 2.0), the energy consumption of its blockchain will reduce by 99.95%, and it may happen as early as 2022.

Have you ever thought about creating an NFT? What type of NFT would you create? Let us know in the comments section. I’m curious!

Make an NFT now!
✖
Get the latest
Updates, Information, & Trends
directly in your inbox