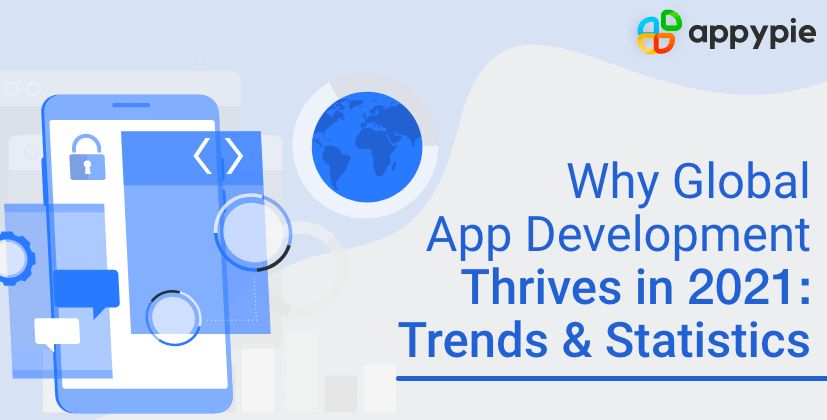 The global app explosion began with a massive increase in the smartphone industry. It took the smartphone just 10 years to reach a market of 2.7 billion people. This figure does not include tablet users. That device has a cool audience just shy of 1.6 billion.

To support so many smartphones and tablets, the app development industry had to pick up equally quickly. The industry experienced a massive boom and constant innovation for nearly 6 years from 2010-2016. After 2016, the industry has continued to rise and thrive.

All of us use smartphones and apps for various reasons and purposes. Here’s how things stand in 2021:

We begin with a quick rundown of the key statistics in 2021. To make it easier, we’ve included a handy infographic below.

We begin this statistical journey with app downloads. According to Statista.com, apps were downloaded nearly 204 billion times in 2019. This was a 45% increase from the original figures of 2016.

The number of downloads continues to increase and it is predicted to reach 258 billion by 2022. However, this figure doesn’t take into consideration the effects of the pandemic yet. There’s a chance that the figure will be higher.

The Growth of the App Development Market

One positive aspect of the growth of app downloads has been the accelerated growth of the app development market. Our application development software Appy Pie AppMakr has seen an impressive 198% growth during the first two quarters of 2020.

One of the key aspects of mobile app development is deciding if you want to make your app free or paid. Well, whatever you choose to do, both sides of the market are seeing steady growth in adoption. There is not a necessary prejudice against paid apps but it still occupies a minor space in the mobile app market.

One key thing to observe is that there has been a decrease in the paid app downloads because of the pandemic. The paid apps market is already back on track for rising in Q2 of 2020. Here’s the graph of the distribution of free and paid Android apps in the Google Play Store in 2020.

Note: iOS has not been included in the graph below. We’ll add it once we have the figures. 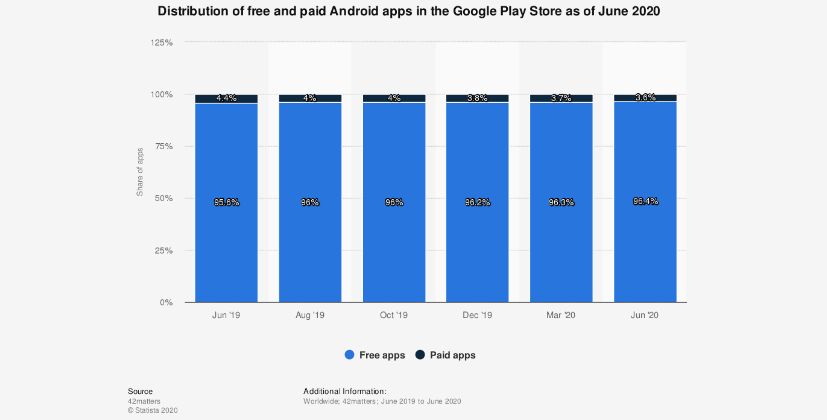 As discussed above, app downloads have increased for both stores in 2020. A positive for app development agencies, low-code, and no-code application development software, and individual developers. The trend will continue to go in a good direction for the near future. As expected, Android leads the charge followed by iOS. 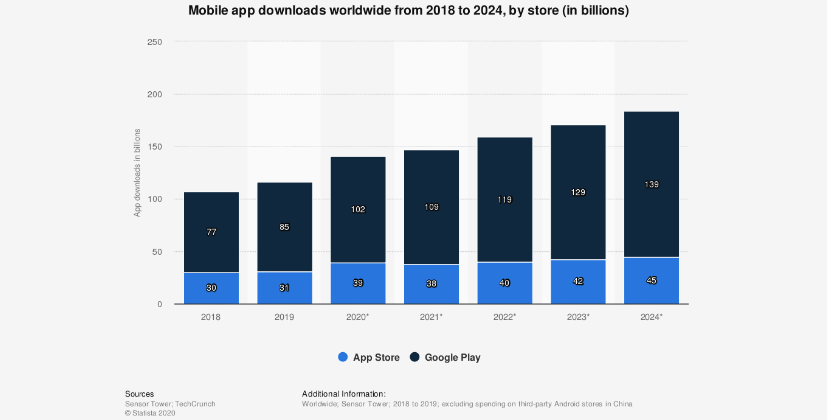 The increase in the number of apps is also very apparent. For example, The Apple App Store alone has added nearly 1 million apps in the first 2 quarters of 2020. For now, we don’t have the figures for Google. We’ll add them once we get them. 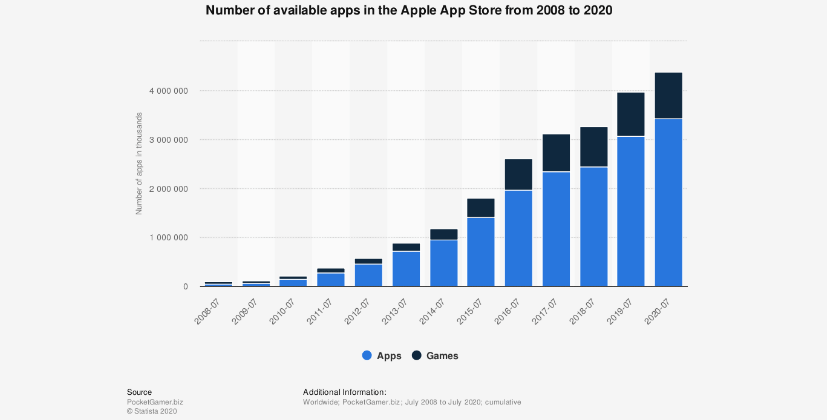 An app’s success also depends on what its customer base is. The market decides what app will be successful and sometimes, even the most innovative apps can fail due to a lack of a proper market for it.

Therefore, it’s necessary for you to understand what app categories have been the most successful. Here are statistics we could find on the Apple App Store for August 2020.

Note: We couldn’t get our hands on the Google Play Store statistics. However, we predict that it is nearly the same spread. 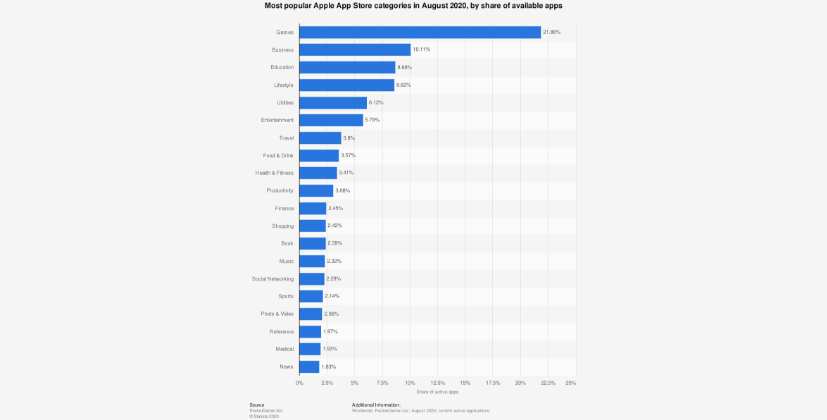 It’s a clear trend that gaming dominates the app store followed by a surprise second category in business apps. Businesses are moving to smartphones! If you feel your small business needs an app, create one with AppyPie.

A key indicator of an app’s success is its retention rate.

What does the retention rate mean?

Coming to the retention rate for apps, an average of 71% of users uninstall your apps in the first 3 months of downloading it. An app’s retention rate can affect its future downloads. Here’s what an older study found regarding the app retention rate. 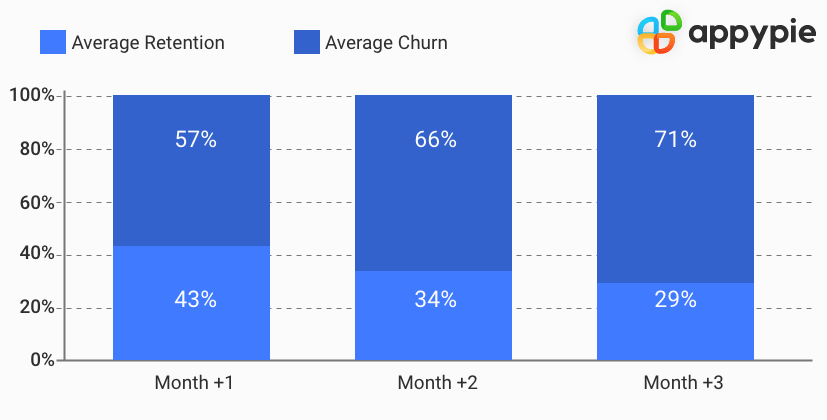 Continuing to track your churn and retention rates is a good measure of how much utility and value your app provides your users. You can use these metrics to improve your app. Don’t know how to perform analytics with your app? Create your app with Appy Pie and judge those analytics yourself.

Retention has taken a hit during COVID. People have more time to try out your app and if they don’t feel it adds enough value they will uninstall your app faster. Early reports for retention rates are out and it doesn’t look good for apps that don’t have enough value for a user. App Uninstall rates are rising and have nearly doubled in this period.

There isn’t an exact figure yet simply due to the confusion of the pandemic. We’ll add more once we get accurate information ourselves.

Certain apps are considered essential by mobile users. These apps are meant for a definitive purpose and most users who have downloaded these apps. For 2020, these are the apps that are considered the most essential:

If you are creating an app, directly competing with these apps on a global scale may not be the wisest choice. However, you can replace Amazon in your local district or create an eCommerce store for a particular kind of goods. One thing to remember is that while the essential apps are completely necessary, there’s always room for competitors. The mobile app industry is highly competitive.

Apart from these apps, all users have different apps for different purposes. It’s up to you to decide what type of users you want to target.

The Effect of the Pandemic on App Usage

It is a well known fact that the average user spends nearly 2 hrs and 15 minutes each day on their smartphone. However, the greatest disruptive trend of 2020 has been the COVID-19 Pandemic.

The pandemic has had a significant impact on app usage statistics. While the exact worldwide figure is still in research, a detailed survey conducted in India showed that app usage nearly doubled during the pandemic. 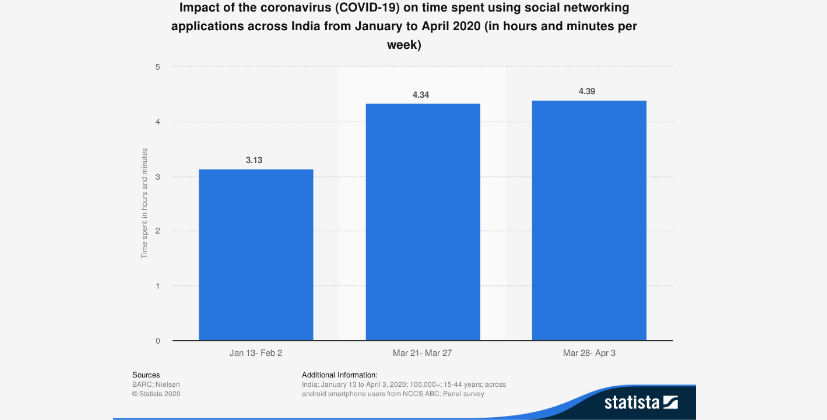 This surge in app usage, however, shouldn’t be taken seriously. The app usage figures will decline as 2020 draws to a close. However, after the pandemic subsides the app usage statistic is likely to increase over the current known average of 2 hrs 15 mins.

Summarizing so far, the effects of the pandemic are yet to be completely defined. Overall, however, apps have been doing well. Despite most industries going into recession, the app industry continues to thrive positively. Sure, there was a slowdown in the initial days of 2020, the app industry has experienced rapid growth. The fall in retention rate may be a pitfall but it’s likely that it is a temporary factor. We’ll have more data on it soon.

The importance of smartphones continues to rise and the importance of apps has been proven. Once the pandemic ends, small businesses are likely to treat apps as an important part of their business. We all have good days ahead!

Before we end, do remember to wash your hands and wear a mask. Good luck!