How to Make RACI Charts for Project Management? (With Examples) 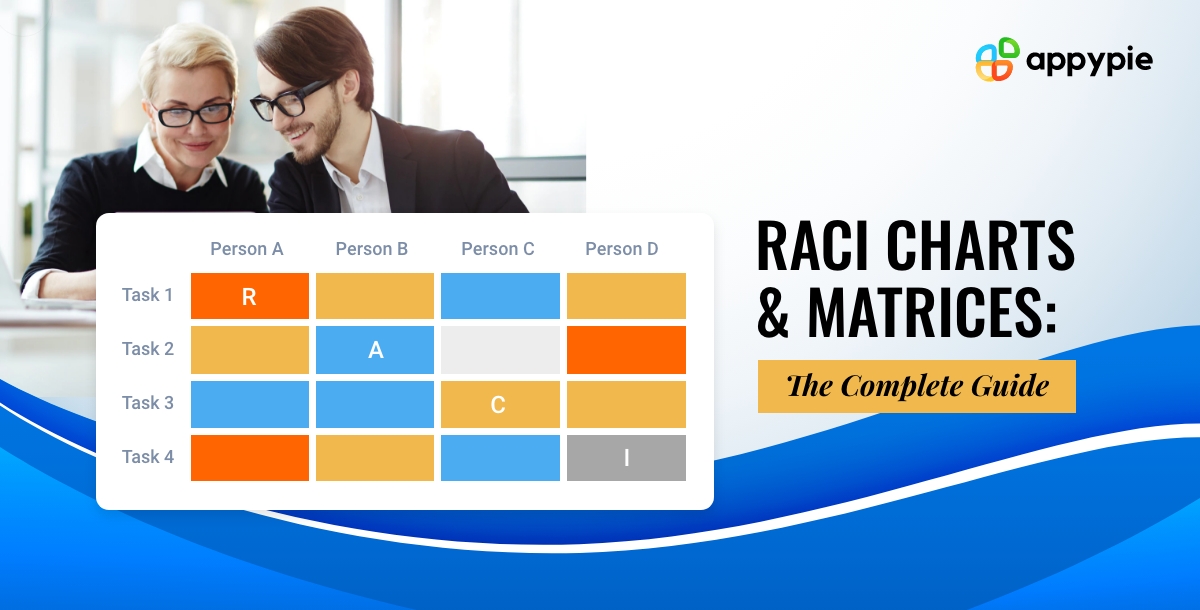 It is pretty easy to lose track while undertaking complex projects. It doesn’t matter if you have a stellar team, the best project management apps, or a watertight plan; confusion, demotivation, and many other factors will creep up in your team and throw your project off track.

Fortunately, avoiding these issues is as simple as creating a RACI chart.

RACI charts, coupled with workflow automation, can help you enhance your team’s effectiveness and efficiency on multiple levels.

In this blog, we are going to explain all about a RACI matrix, along with some templates, definitions, and examples of it being used in project management, and how it can help you tackle all problems that arise while working on a project.

What is a RACI Chart?

Also known as a responsibility assignment matrix, the RACI chart is a simple diagram used to map task responsibilities and roles in project management. The term RACI is an acronym that stands for, Responsible, Accountable, Consulted, or Informed.

Responsible: This is the person responsible for ensuring that the tasks and assignments on a project are being worked on. Generally, there are more Rs in a team.

Accountable: This is the decision maker within a team and is someone who makes sure that the responsibilities are assigned correctly. According to the RACI matrix definitions, a team should only have one A.

Consulted: This person or group is responsible for providing feedback and evaluating the tasks being performed. They act as consultants to the team on various actions and topics.

Informed: Although this is someone who isn’t directly involved in a project, but is someone who should be updated once the project is completed and all tasks are accomplished.

As you can see, a RACI matrix identifies the individuals working on a product and what they’re doing at every level, helping eliminate confusion.

Large project management teams involving multiple team members spread over different departments are more likely to suffer from role confusion. In such situations, a RACI model comes in handy. It offers a wide range of advantages, which include:

As seen above, the RACI matrix not ensures better task management but also makes sure that every relationship is managed appropriately. This is why this model is widely regarded as the best project management solution in B2B and B2C businesses.

When to use RACI Matrix?

There is a broad scope for RACI chart models within projects, and the best part is that it is amazingly flexible, which means that it can be used for any industry. This matrix can be used in several different scenarios, such as:

However, it must be noted that RACI charts are not the best solutions for small project management teams as they could bog down the decision-making process and slow down the project. On the other hand, it works exceptionally well with larger and more complex projects with multiple stakeholders.

How to create RACI Chart?

Before you set out to create one, keep these RACI matrix rules and factors in mind:

Now that we’ve cleared this up let us look at the steps to create a RACI chart with some RACI matrix examples.

Step 1: Identify the team members and their roles
Use names and assign them their roles, such as project manager, analyst, developer, and others.

Step 2: Define project deliverables and major milestones
For projects like creating an app, the deliverables could be designing, testing and approval.

Step 3: Draw a matrix with a row for every team member and a column for each task
To create a RACI chart, you can use Excel or designing software.

Step 4: Fill in the boxes with the corresponding R, A, C, and I to designate the roles of every member for each task.
For the designing milestone in the app creation example, as mentioned earlier, the designer would be responsible for getting the manager’s approval, and other stakeholders, such as the clients, would need to be informed of the outcome.

Step 5: Discuss, scrutinize and get consent from the project team.
It could be possible that some members would request a reallocation of responsibilities, which is what makes this step vital.

Step 6: Provide everyone with a copy of the file.
Make sure all team members receive a copy so that everyone’s on the same page.

Now that you’ve seen how to create these charts, let’s look at some RACI matrix templates and examples. 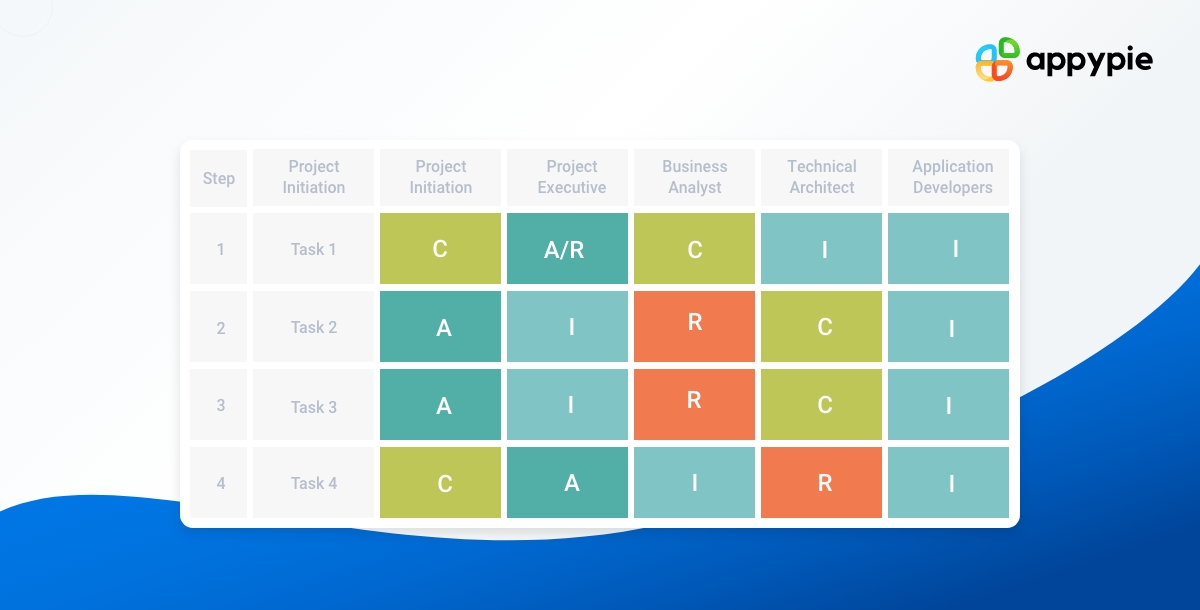 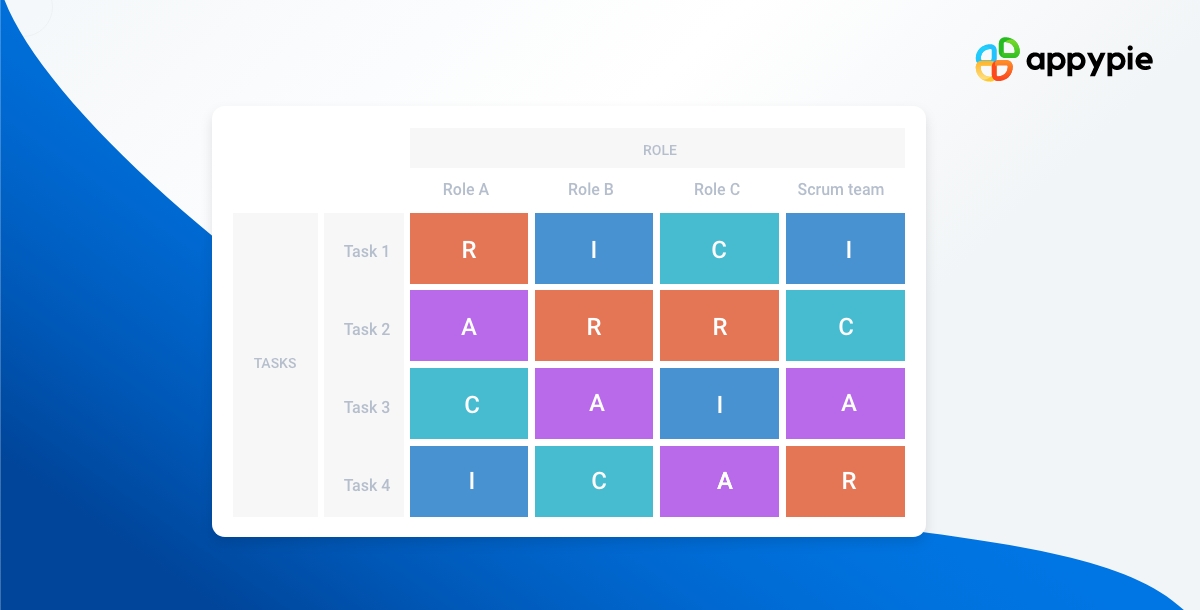 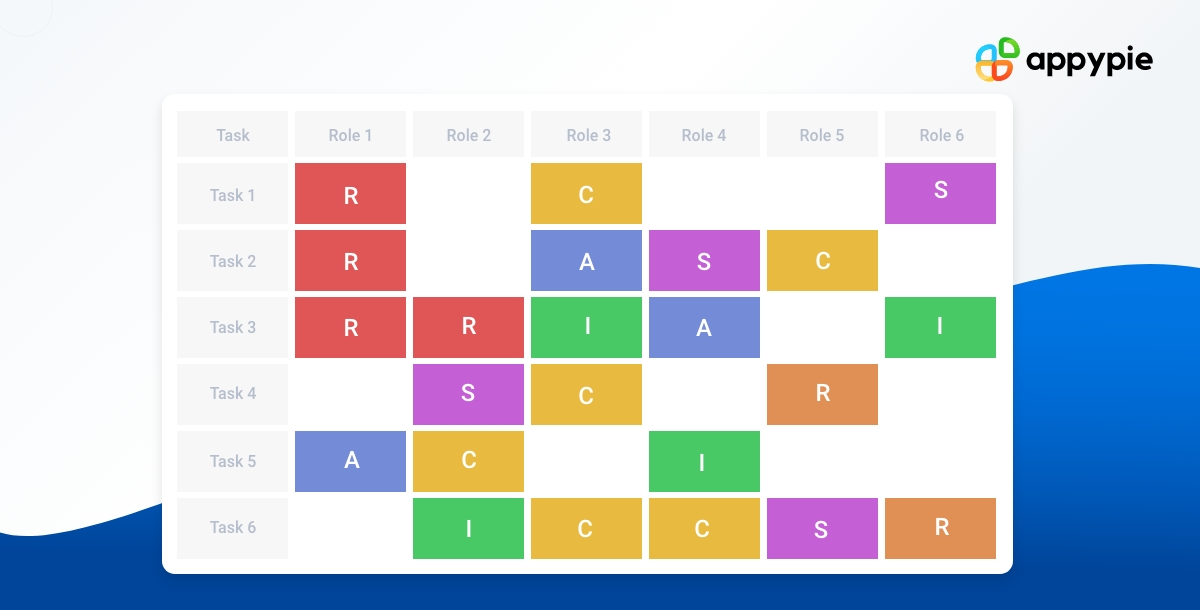 RACI is a document used for defining roles and responsibilities within a project, providing a clear outline, and ensuring that work is fairly distributed and allocated among all team members. It is an effective tool for ensuring that projects are completed on time by eliminating bottlenecks and confusion.

As mentioned earlier, workflow automation tools like Appy Pie Connect can expand your functionality further and boost workflow efficiency and productivity by a significant margin.