Native app vs Web app: What Developers Need To Know 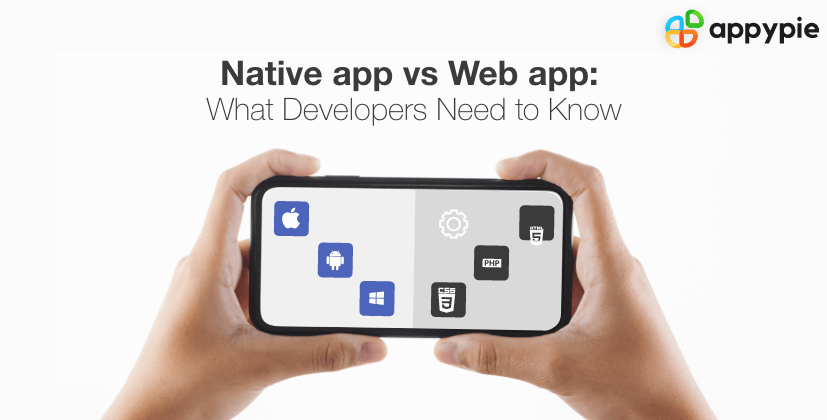 Business leaders have important decisions to take more often than others. One of them is about their mobile strategy.

The number of web page views from smartphones is increasing rapidly at 48%. It’s clear, mobile is taking over the internet.

Mobile apps have become an essential tool in every business’s kit. Thus, the need for them to deliver a great mobile experience is obvious.

If you could have your way, you’d have the best of all worlds.

Progressive Web Apps (PWA) make that possible. Check out this video that tells you how you can make your first web app.

These apps combine the capabilities of a native app and accessibility of a website. Developers often wonder – will web apps replace native apps in the future?

What follows is an in-depth comparison of native and web apps, focused on the difference between a native and hybrid app, unique benefits of each, and what developers need to know?

Here’s a video that touches upon this interesting subject.

What are Progressive Web Apps (PWA)?

A PWA is a web app that leverages modern web technologies to deliver a standard app-like experience to users. The best examples of PWA are Twitter, Uber, Tinder, and many more.

According to a study, an app can lose up to 20% of its users for every step between the first contact, until they start using the app.

The journey of the user starts from finding the app in the app store, downloading it, and then finally using it – this is a time taking process.

But when a user finds a PWA, they immediately start using the service, bypassing the stages of searching, downloading, and installing. Only when the user returns to the app, will they be prompted to install and experience the full-fledged app navigation.

This does not mean PWAs are the perfect solution, and the Native vs Web app discussion continues.

What are Native Apps?

Native apps are built for specific platforms and are written in distinct languages, such as Swift for native iOS apps and Java or Kotlin for native Android apps.

Interestingly, native apps need to be developed twice – once for iOS, and separately for Android, so that they can work optimally with both major operating systems.

Native apps can run in a self-contained mode on your mobile device and can function on a specific operating system.

Any app you download on your smartphone from an app store falls into the Native app category.

The time duration and ease of development between progressive web apps vs native are quite glaring. PWAs are built faster since developing only one version is required that will seamlessly display on all types of mobile devices.

Also, since PWAs are built to work on all browsers that can be common for all mobile devices, the development is a lot faster than native apps.

On the other hand, building a native app takes more time because several versions for different platforms such as Android and iOS devices are developed separately and by different teams.

Every digital project must reflect security, especially if the app is handling the personal data of users.

Native app development involves adding an extra layer of security to ensure user data is secure at all times. It also provides an opportunity to include additional features.

Native apps can access smartphone information, which makes it possible to build security features such as two-step authentication through the user’s phone number. Also, native apps can include embedded TLS certificates making security prominent for users.

Progressive web apps although do not have any unique security certification but can be served over HTTPS, making security options strong and reliable.

So, the question remains – will progressive web apps replace native apps? The answer at this point of time is – maybe. Let’s dig a little deeper, here.

Let’s delve into the pros and cons of PWAs to be able to answer the question with any credibility.

Now that you know all about native apps and PWAs, it will become easier for you to decide which app is best for your strategy.

The choice of the app depends on the end goals. If your goal is to establish a broad mobile presence with less investment across multiple platforms, then you must go for a PWA.

PWA users can also save the app to their home screen without having to download it making it the next big thing happening to mobile.
Create a PWA now!
And if you have the time and resources to hire developers for different options, a native app is the best choice for you. However, there is always Appy Pie AppMakr that is the best way to create an app without coding, in just a few minutes!
Create an app in minutes!
Which one works the best for you? A Progressive Web App (PWA) or a native app. Let us know in the comments section. We love to hear from our readers!