Mobile apps have become increasingly popular in recent years due to the rise of smartphones and other mobile devices. In order to understand how people are using these apps, it is important to look at mobile app usage statistics. Mobile app usage statistics can provide valuable insights into the behavior of app users, allowing developers to better understand how people interact with their apps.

By looking at mobile app usage statistics, developers can learn how often users open their apps, how much time they spend using them, and what features they use most frequently. This information can be used to improve existing apps, as well as inform the development of new ones. With this information, developers can create apps that are more engaging and user-friendly, leading to higher levels of user satisfaction and increased downloads.

People all over the world use apps, whether on smartphones or on tablets. With every passing year, global app downloads see a steady increase, as app popularity grows. 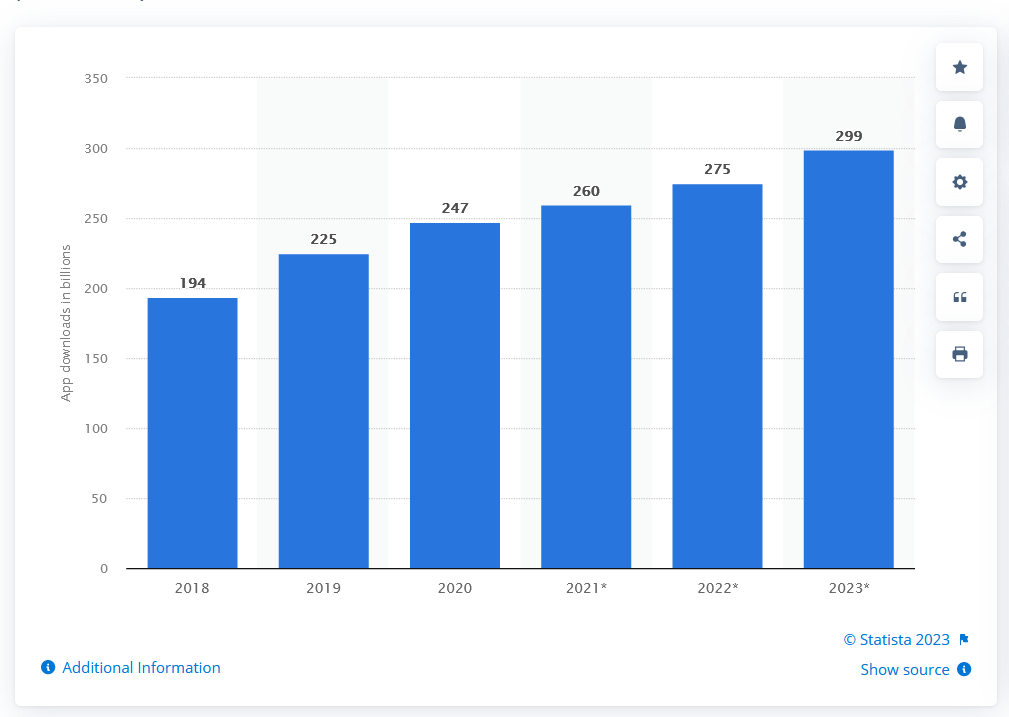 As of November 2022, 97% of apps in the Google Play app store, and 94% of apps on Apple App Store were freely available. Meanwhile, the number of paid apps on Google Play Store is 3.1% while that on App Store is 5.8%. 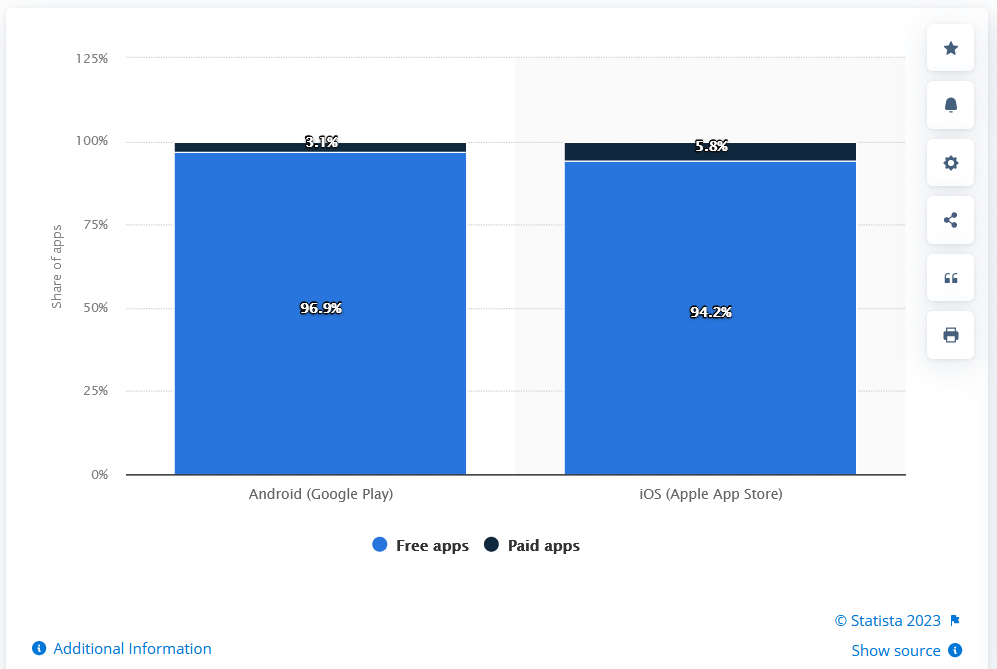 Users with Android devices download their apps from Google Play Store while those with iOS devices download from the Apple App Store. These two app stores are favored overwhelmingly across the globe, but how do they fare when compared head-to-head?

In 2021, a total of 111 billion apps were downloaded on Google Play Store, which is projected to increase to 143 billion by 2026. In comparison, downloads on Apple App Store stood at 33 billion in 2021, and are projected to increase marginally to 38 billion in 2026. While Google Play Store downloads are expected to grow by almost 29%, Apple App Store might only have a 15% growth rate. 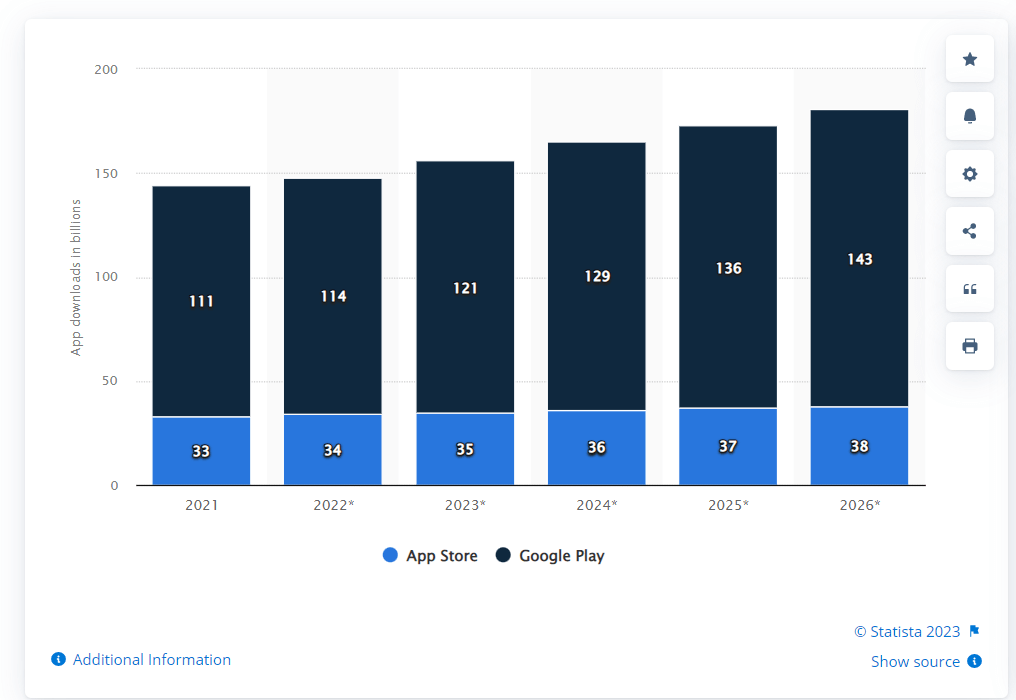 While Apple App Store is far behind Google Play Store in the number of downloads, it still is a very popular platform. iOS devices including iPhones are very popular among many users worldwide, which makes iOS app development a profitable business venture. If you’re thinking about developing an app, you should know what customers want.

Despite having revolutionary ideas, concepts, or features, many apps fail simply because they do not have any market for usage, making them struggle to get downloads.

Here are some of the most popular iOS app categories you can consider.

What are the most popular App Store categories? 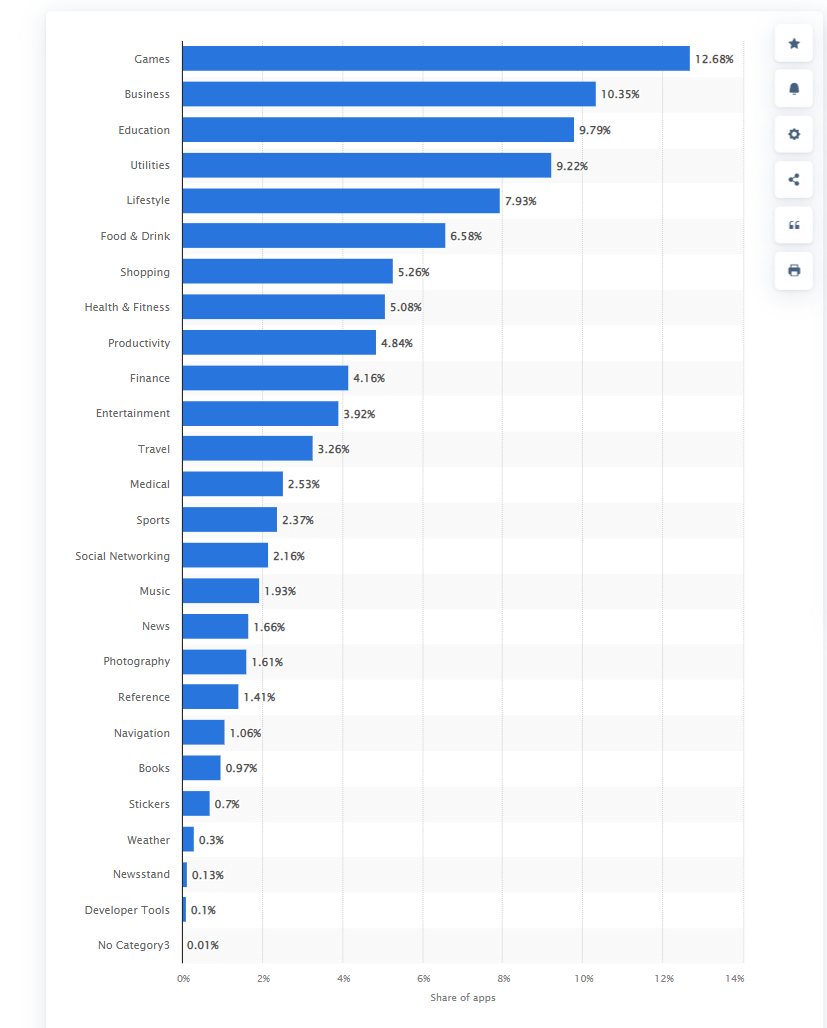 As seen above, gaming completely dominates the App Store with a 12.68% share of all the apps followed by Business at 10.35%. This doesn’t mean you have to create a gaming app to succeed. The app category you opt for must be relevant to your business as well as to the purpose of your app. For instance, if you’re in the e-commerce sector, you can’t categorize your e-commerce app as a game to get more downloads. It is a violation of the App Store guidelines which might make it liable for removal from the App Store. Your app can still be successful even if it isn’t the most popular category.

How many apps are there on Apple App Store?

The app industry is highly competitive, but how many apps are you actually competing against? 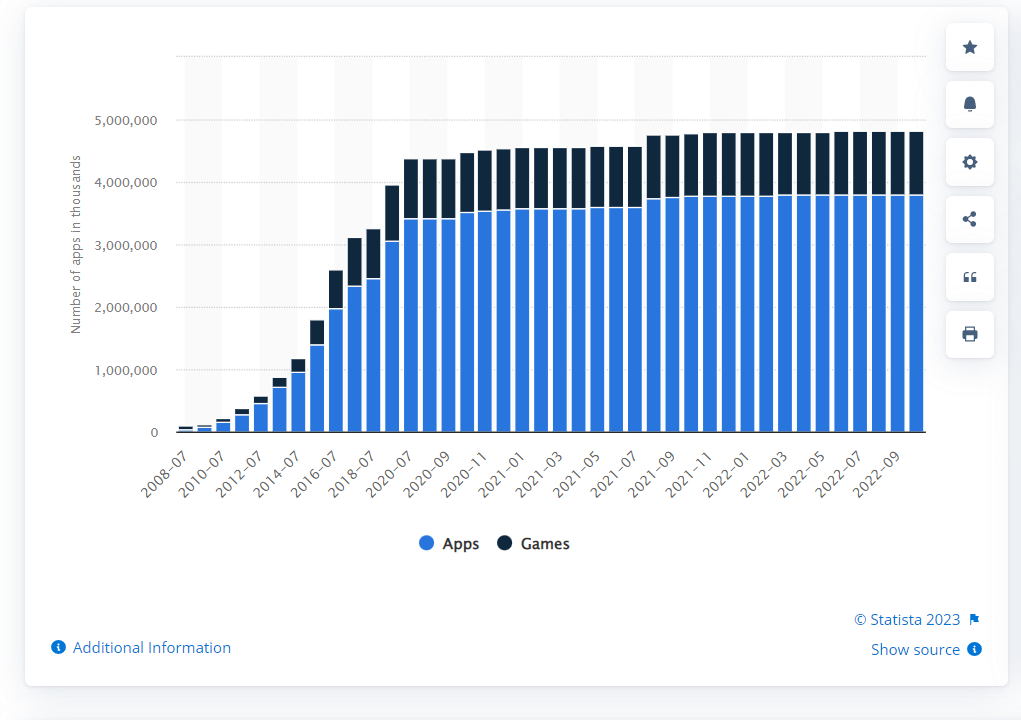 Google Play Store is the official app store for Android devices and is the largest digital distribution platform for mobile apps. Through the Google Play Store, users can browse and download a variety of applications, games, books, movies, music, and more. By tracking the download statistics of apps in the store, businesses can gain insight into how their products will be used, identify trends and make informed decisions about marketing and product development.

What are the most popular Google Play Store categories? 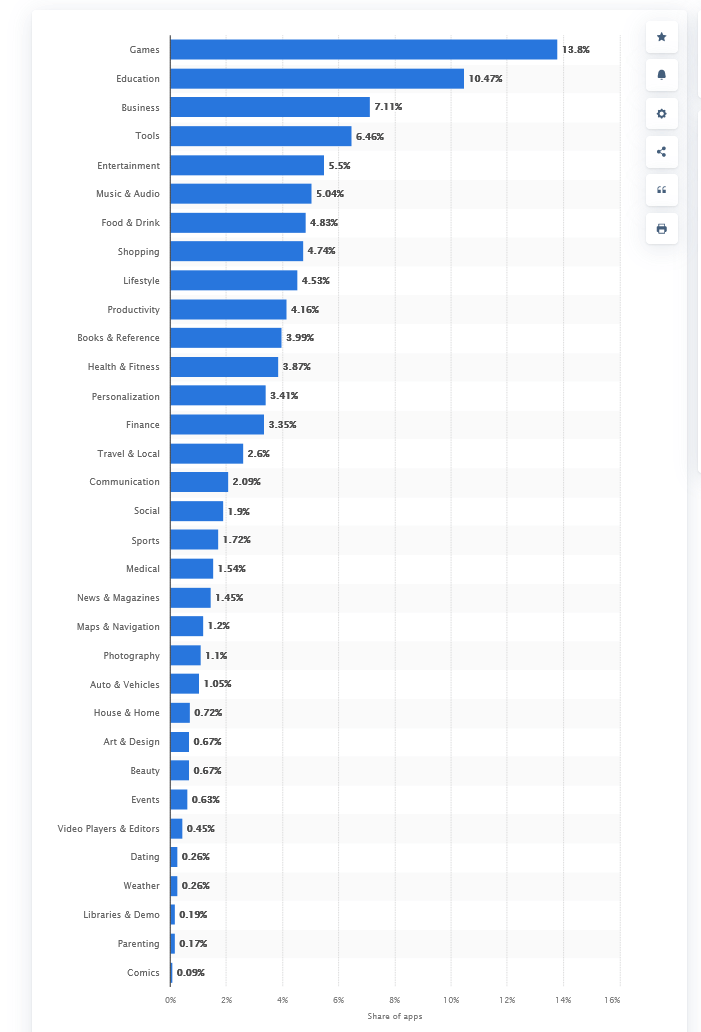 Here also, gaming apps dominate the scene with almost 13.8% total share of all the apps followed by educational and business apps with 10.47% and 7.11% share respectively. While this exhaustive list gives a lot of insight into app trends, app developers must note that many Android devices come with pre-loaded apps.

How many apps are there on Google Play Store? 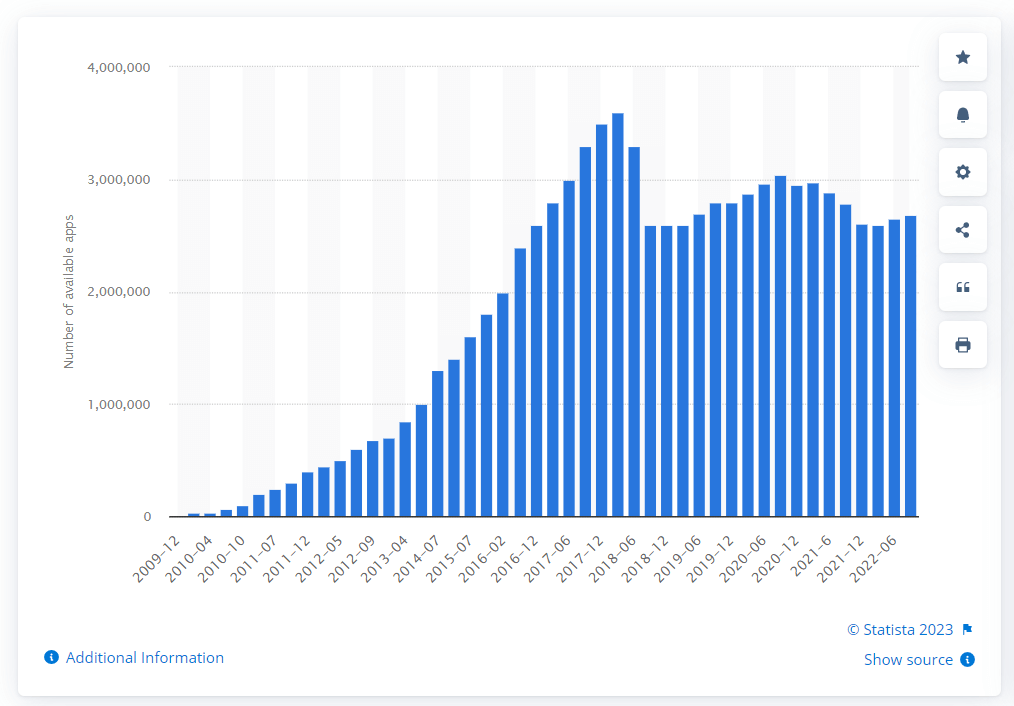 If you look at the graph above, you’ll see that it doesn’t have the same trajectory as Apple App Store. The total number of apps available for download fell drastically post-2017 but have been climbing steadily since. Both app stores continuously monitor their apps and remove those which violate their guidelines.

What are the most widely used app categories?

There were 2.7 billion mobile gamers worldwide in 2020 and it is projected that this number has grown to 3.5 billion in 2022. This growth is largely due to the increasing popularity of gaming apps such as Clash of Clans and Candy Crush Saga. Additionally, streaming services such as Netflix and Hulu are expected to become increasingly popular on mobile devices, with an estimated 1.3 billion users worldwide by 2022.

The total global spend on retail apps is expected to reach $101 billion in 2022. This figure is driven by the growing popularity of e-commerce apps such as Amazon and AliExpress, which offer a wide variety of products at competitive prices. Additionally, the use of mobile wallets such as Apple Pay and Google Pay is expected to increase significantly over the next few years as they provide a more convenient way to pay for goods and services.

There were 3.2 billion active social media users worldwide in 2020 and this number is projected to increase to 4.41 billion by 2022. This growth is largely due to the increasing popularity of platforms such as Facebook, Instagram, Snapchat, and Twitter among both young and old users alike. Additionally, messaging apps such as WhatsApp and WeChat are expected to remain popular due to their convenience and ease of use for messaging friends and family members.

The global market for educational apps is expected to grow from $20 billion in 2020 to $45 billion by 2022. This growth is driven by the increasing prevalence of online learning platforms such as Khan Academy and Coursera which offer a wide variety of courses for students at all levels. Additionally, mobile education apps such as Duolingo and Quizlet are becoming increasingly popular among students who want to learn new languages or study for exams on the go.

What is mobile app retention?

There is no guarantee of app usage after a download. There are plenty of apps that receive an initial surge in downloads but struggle to get users to actually use the app.

Retention describes the measure of how many users continue to actively engage with an app over time. Churn, on the other hand, is the measure of how many users drop out of using an app over time. Both measures are important indicators of how well an app is doing and can help inform decisions regarding updates and other changes. 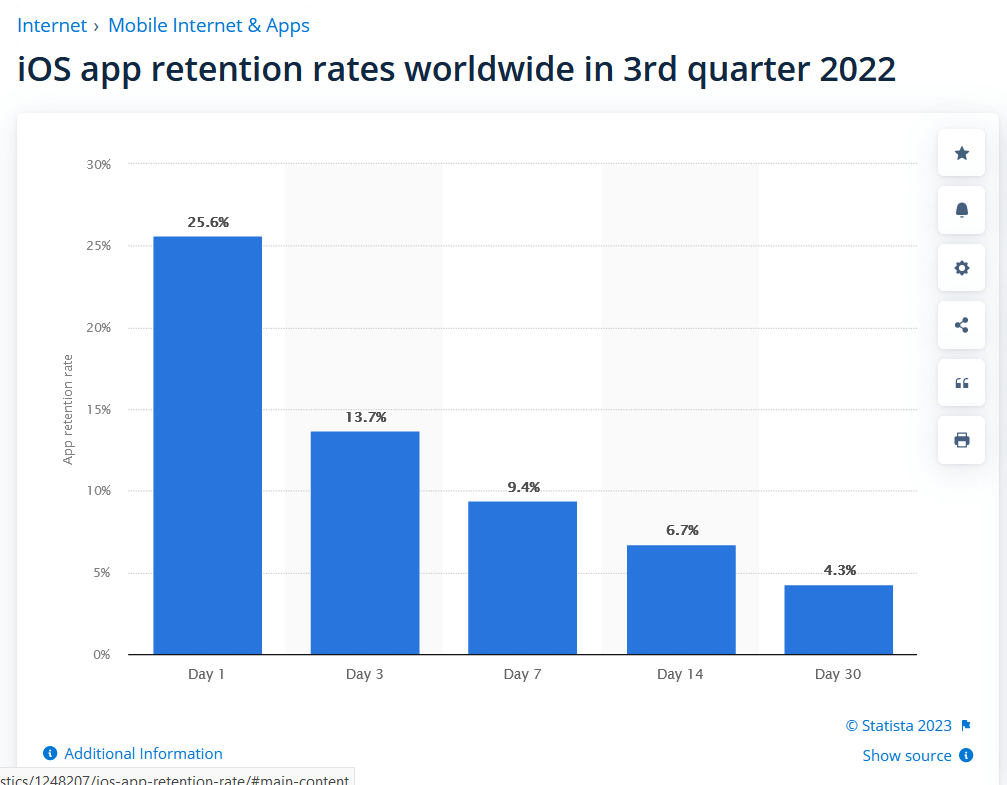 Retention rates in iOS apps after one day was 25.6% during the third quarter of 2022. It decreases steadily and reaches 4.3% after 30 days. This means that an iOS app losses 74.4% of its users on the first day itself. 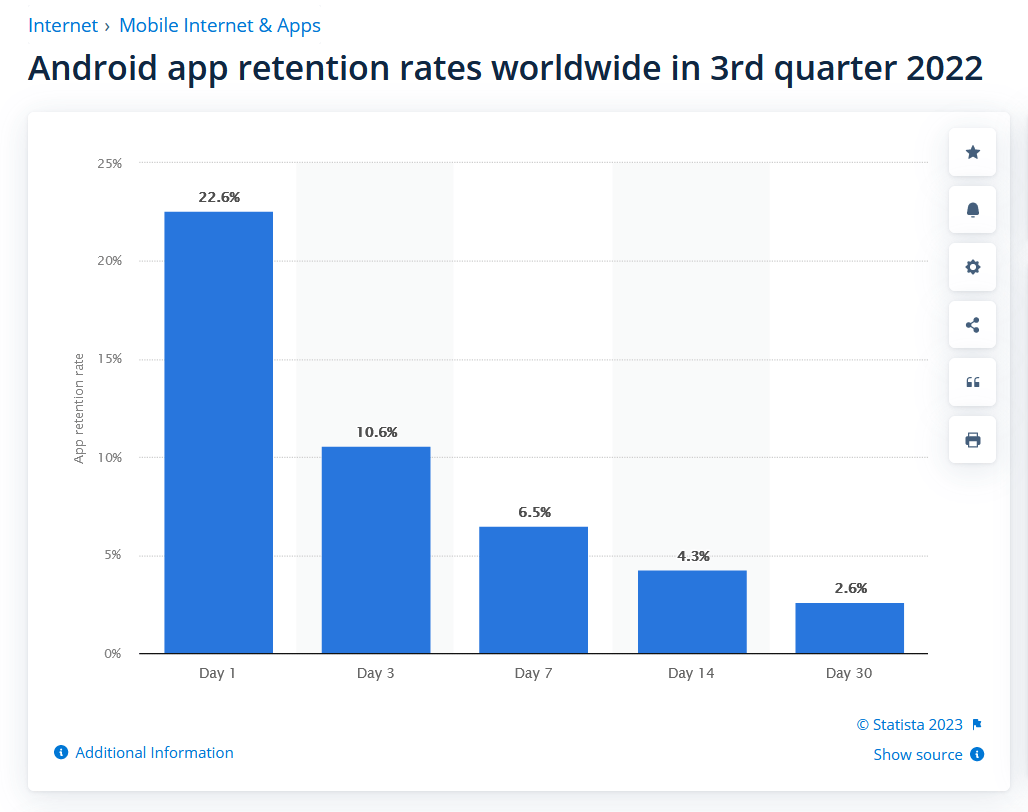 Which are the most popular apps?

The world of mobile apps is an ever-growing and ever-evolving universe. However, there are some apps that stand out above the rest and have become extremely popular in recent years. These apps are designed to make our lives easier, more organized, and a lot more fun. From streaming services to photo editing tools, these are the most popular apps that everyone should know about. 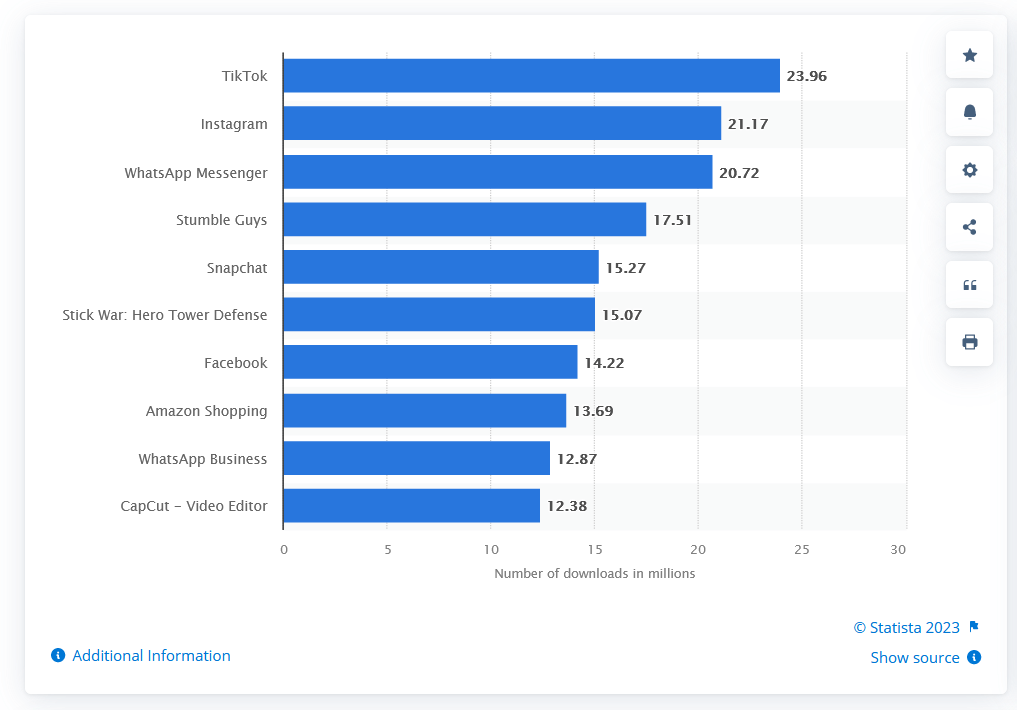 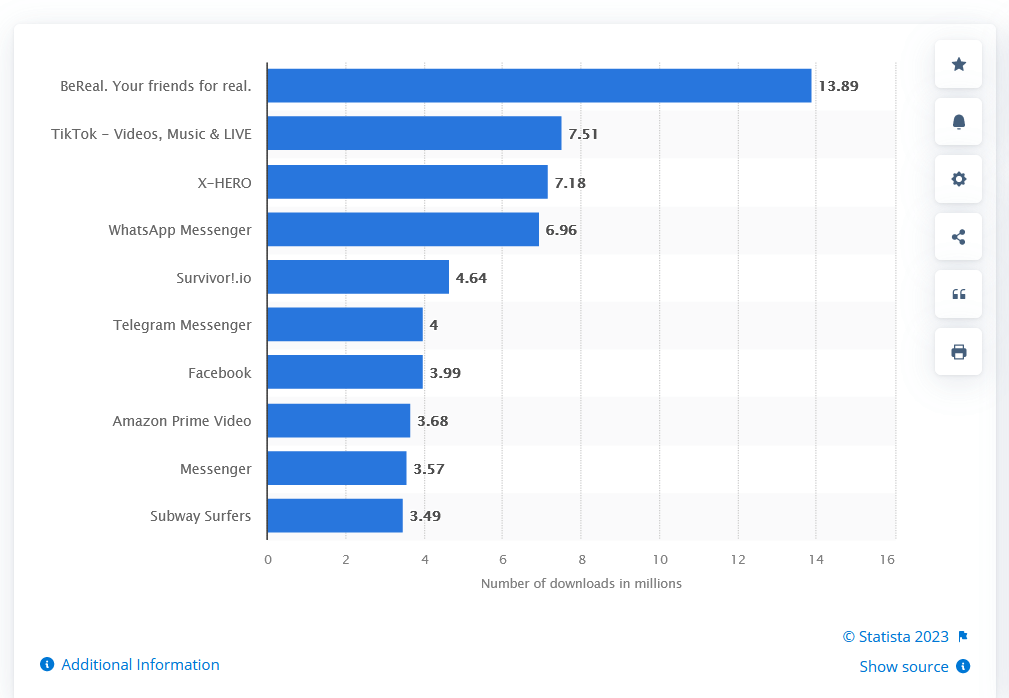 Mobile app usage has been on the rise since its inception, with many different age groups downloading and using different apps. With mobile apps becoming increasingly popular, it is important to understand how different ages use mobile apps and the impact this has on their lives. This article will explore the usage of mobile apps by age. 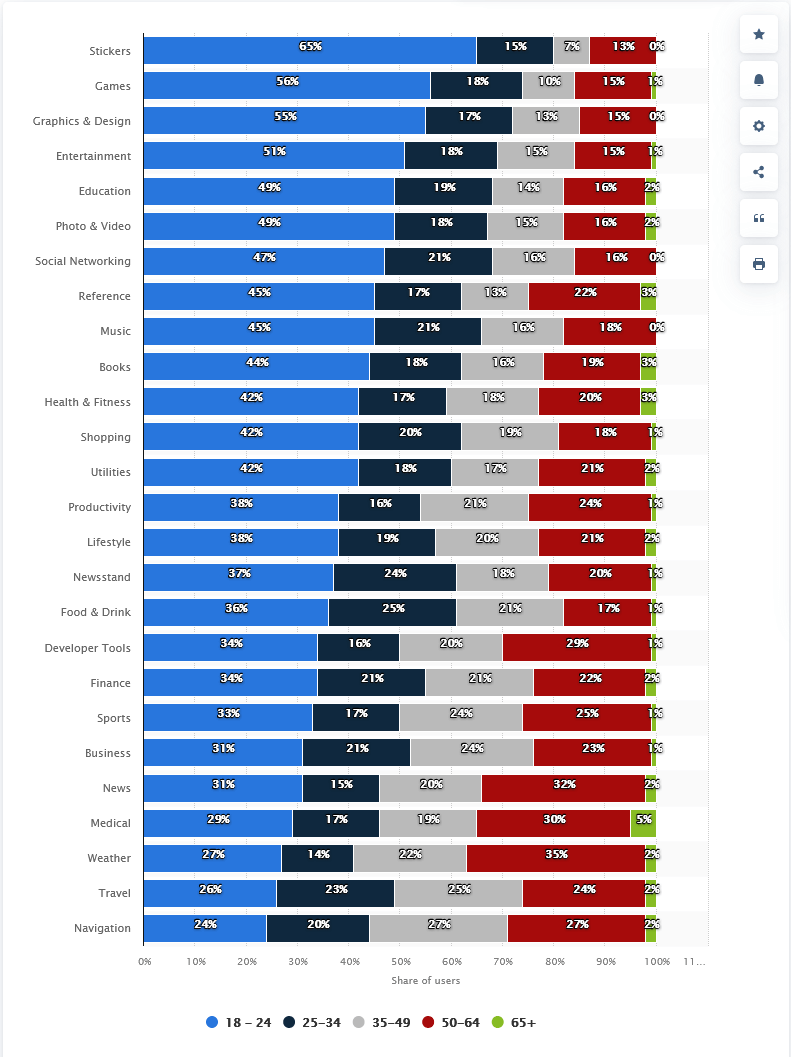 Users within the 25-34 age category, mostly use Food & Drink App, which received a 25% user share, whereas Weather apps received the least user share at 14%.

Users in the 35-49 age category preferred Travel apps, while those in the 50-64 age range mostly used Weather apps on iOS.

65+ users, though very small in number, were found to prefer Medical apps the most. 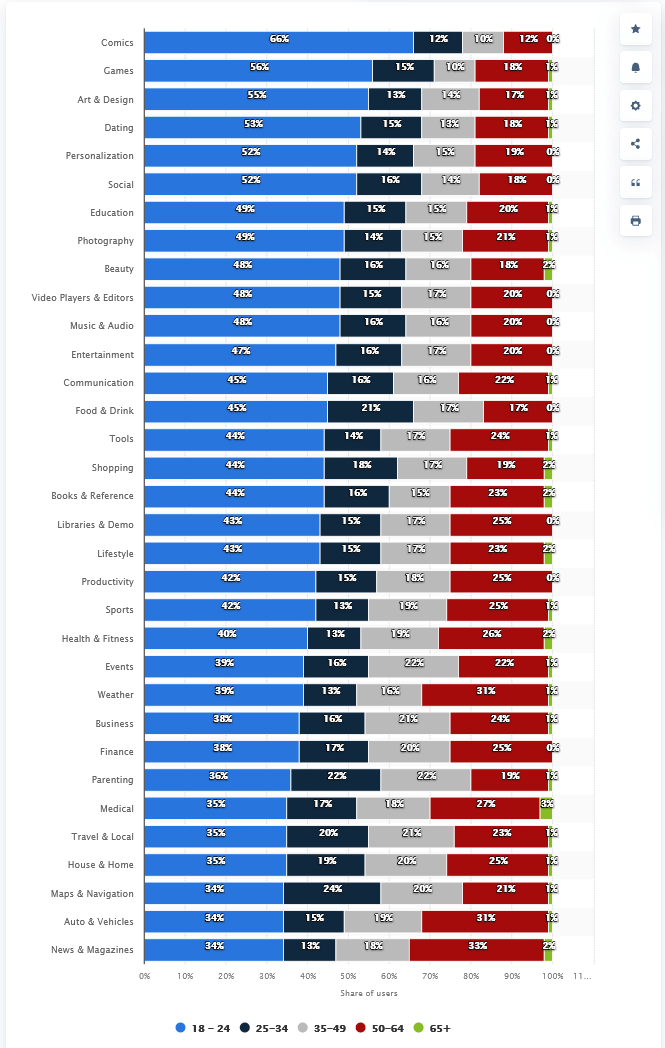 Users in the 35-49 age category were found using Parenting and Events apps which was an interesting combination. 50-64 aged users had a significant share of 33% in the News & Magazines section.

For the 65+ category, the results were similar to those seen on iOS, as Medical apps were found to have the maximum user share within this age range.

The rise of mobile app usage is likely to continue as more people adopt smartphones and new technology is developed. Businesses must keep up with the latest trends in order to remain competitive in the market. As mobile app usage continues to grow, companies have an opportunity to tap into this market and gain a competitive advantage over their competitors. It is also important for businesses to ensure that their apps are optimized for different devices and platforms in order to maximize reach and engagement. By leveraging the power of mobile apps, businesses can increase their customer base, expand their services, and gain a competitive edge over their rivals.