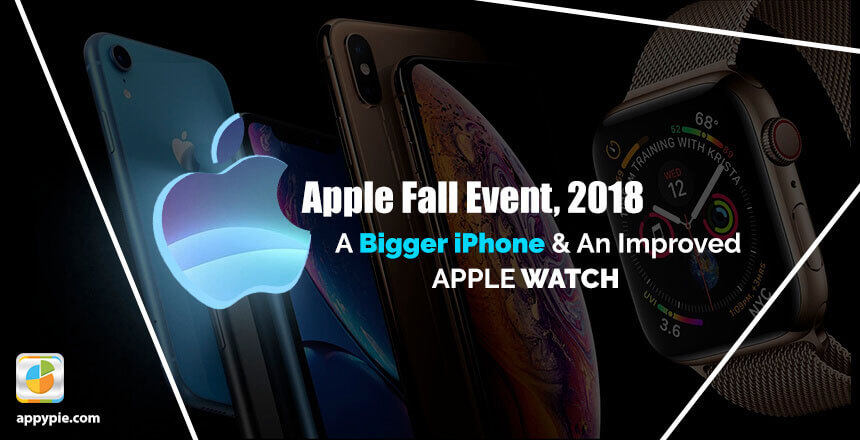 App Builder Appy Pie: This Wednesday witnessed the much awaited and badly anticipated annual fall product event for Apple. One of the ‘biggest’ highlights was the iPhone XS Max which, at the screen size of 6.5” is the biggest iPhone launched yet, and the most expensive as well.

The event that was held in Cupertino, California, Apple’s headquarters was awaited with a lot of speculation and announced not just new iPhones but an all new Apple Watch as well.

iPhones form the most important product line for Apple and they have been following a long-standing playbook for the same – Keep rolling out bigger, faster, and more expensive models.

This Wednesday saw a reiteration of the same where a whole new range of iPhones were introduced which are going to be bigger, faster, and definitely more expensive. iPhone X that debuted last year was priced at $1,000 and the iPhone XS Max was launched at $1,100.

The new smart watch from Apple though seemed to be a testament to shaping up and concentrating on your health. The new Apple Watch that was showcased at the event comes with an electronic heart sensor which is approved by the FDA (Food & Drug Administration). This aspect not only means big things for health care, but also can bring Apple Watch at the same level as iPhone, instead of staying hidden in its shadows.

The launch of these phones was probably the biggest takeaway from the whole event. The three newly launched iPhones, in terms of design are essentially the same as iPhone X which was launched last year flaunting a front façade that is all screen barring a notch cut on the top to house a front facing camera and no Home Button.

This lineup launched on Wednesday, however was indeed the most expensive product lineup ever to be launched by Apple.

Both the new iPhone XS and the iPhone XS Max come with an enhanced OLED screen which was termed by Apple as “Super Retina” display. They are still true tone displays and support HDR.

The XS models are faster versions of XS which come with an advanced processor, durable glass, and Super Retina OLED display that has a huge color gamut.

The iPhone XR is more of an entry level model that has a 6.1” screen but is just as fast as the more expensive XS models. It, however has a single-lens camera in contrast to the dual-lens camera systems on XS phones.

The XR screens are LCD with “Liquid Retina” technology which are comparatively a lesser expensive technology that XS phones’ OLED technology. Another salient difference is that the casing on XR phones is that of aluminum whereas in the XS range of phones the casing is made of stainless steel. 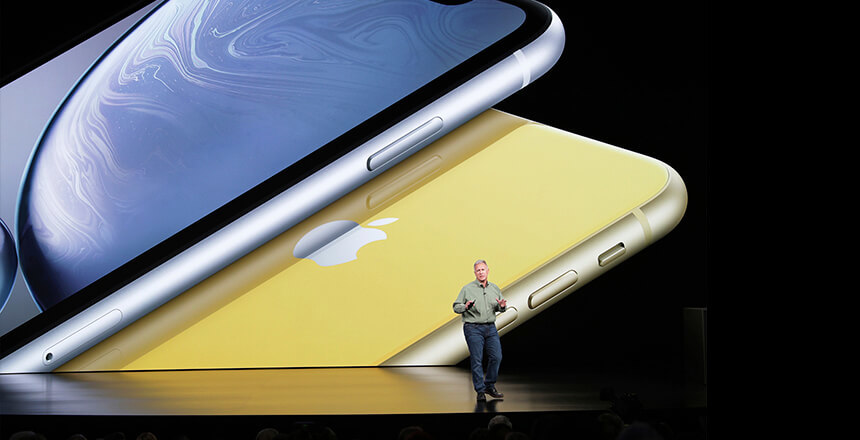 The trend of going big with the screen size of phones is actually quite real and quite like the big screen TVs, people do prefer bigger screens for their mobile phones as well.

There, of course is a matter of discomfort in using large screen mobile phones as they become quite difficult to use with a single hand. This was a problem iPhone X users faced, when they could not reach their thumb across the 5.8” screen for typing a keystroke or for hitting a button on any of the apps.

This problem was addressed by Apple when they started increasing their phone screen sizes with iPhone 6 with Reachability – a software shortcut. Using this shortcut, the users could double tap the home button to lower the top of the screen, making it easier to reach the buttons or other elements that were out of reach otherwise.

In the new iPhones, however there are no home buttons, hence the feature is tweaked a little and now you have to swipe down from the bottom of the screen which makes the process cumbersome.

The cameras in the new phones have been remarkably improved and come with a unique feature which lets you refocus the picture after they have already been taken. This feature though was already being offered by Samsung for at least two years now!

Interestingly, most of the updates that were announced were largely technical in nature and to be frank, quite incremental. Several video game developers were also invited on the stage with the intent to demonstrate the enhancements that have been made to the graphics and to the processing performance of the devices. 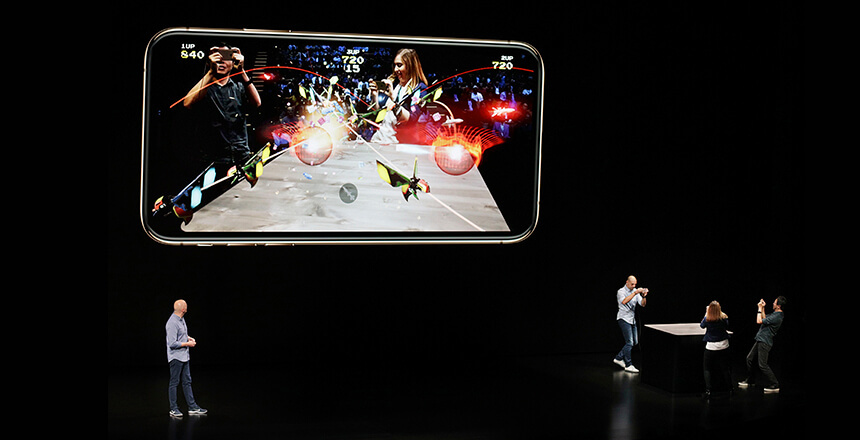 The multiplayer augmented reality feature demonstrated in the gameplay actually became quite an event on its own as three players on the stage were playing an arcade shooter game simultaneously while using three different phones. The hope is to create a connection between the players in the digital paradigm as well as the real world. 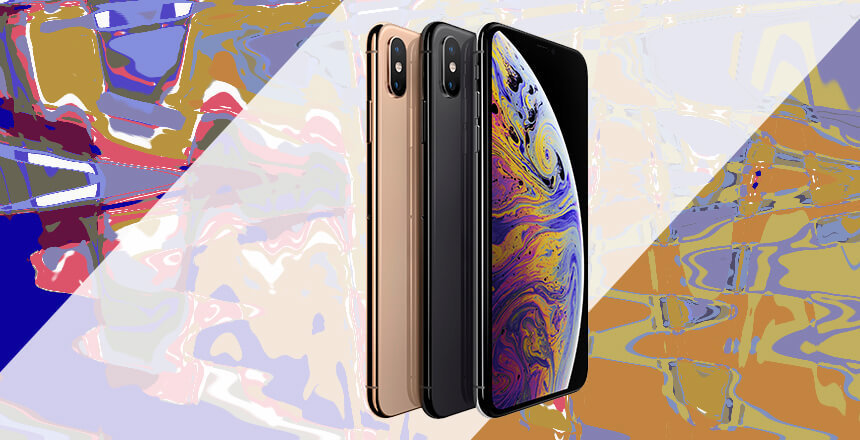 iPhone XS however is the same size and price as the previously launched iPhone X.

Owing to minor tweaks in technology, iPhone XR would be available to the customers at $749. The phone looks quite similar to the X variant but has a 6.1” slightly lesser expensive LCD screen.

It was announced on the stage that the Apple Watch line is now the leader in watches when it comes to the number of sales, and with the Series 4, they intend to keep their position.

This is the first major redesign since the Apple smartwatch was released for the first time. Though the overall design identity stays the same, yet it can be considered a big redesign in many ways. 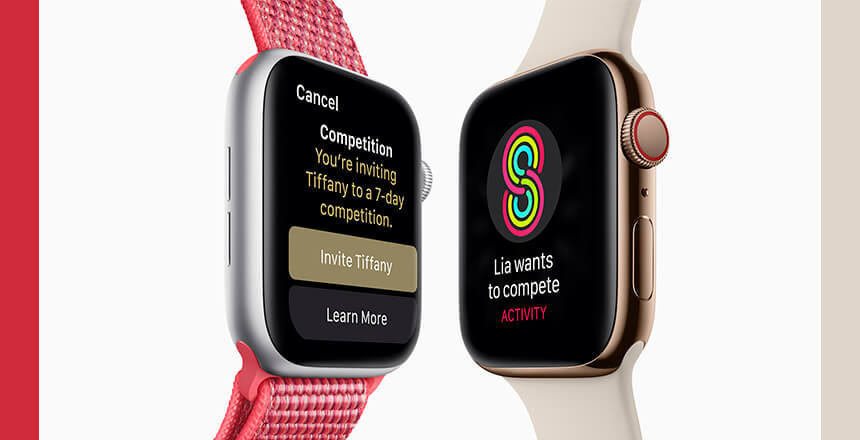 The overall size stays the same, but the new watch is thinner, and the displays cover more of the faces on the watch. The screen sizes have however increased from 38mm to 40mm and from 42mm to 44mm. the magnanimity of this change can be better understood by the fact that the new screens are in fact more than 30% larger than the earlier models in terms of surface area.

Apart from this, the redesign seems to lean heavily towards turning the device into more of a health aid. The new watch comes with a faster processor and improved health and motion sensors. The watch can detect if the wearer trips and falls, prompting or alerting them to call the emergency services. Also, if the watch does not sense any motion for a minute, it makes that call automatically. The watch also has the ability to perform an electrocardiogram letting you know of any concerning aberrations in the rhythm of their heart.

Apart from this, Tim Cook also indicated that he wants to double the revenue of its services business by 2020. This is further substantiated by the fact that the company has steadily been investing greater resources into the software and services like the App Store and the ever-growing entertainment streaming business.

Another interesting update was about the HomePod, the unique wireless speakers from Apple which takes the Siri experience of customers to another high altogether. 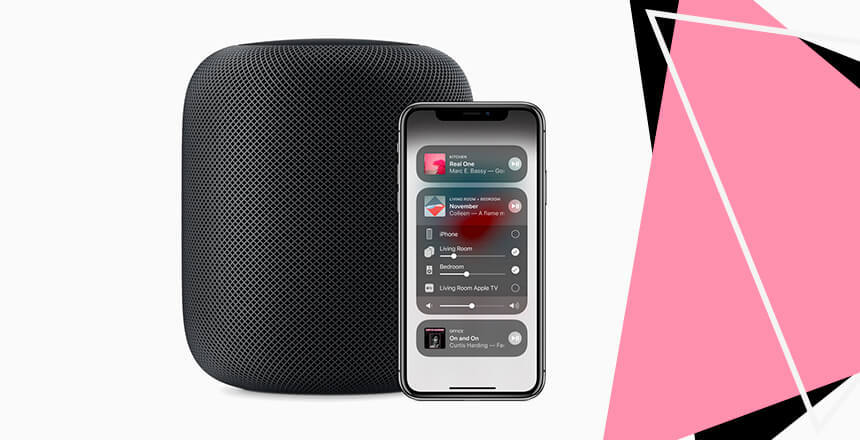 In the event on Wednesday, Apple also announced that the final version of iOS 12 would be released to the public on Monday, September 17th. The full feature iOS 12 GM would soon be available to the beta testers.

Also, speculations came to an end finally as Apple confirmed that the public version of macOS Mojave would be released a week after the release of iOS 12, i.e. on the following Monday, September 24th.

There was no announcement about any updates for a lot of products like iPad Pro, wireless AirPods headphones etc.

Also, there was no mention of any update being offered on the AirPower, the wireless charging mat which was announced last year, but is yet to hit the market.

Two of the Apple products MacBook Air & Mac Mini which are now overdue for a refresh were not paid any attention either.

Apple has also developed a robot – Liam which can disassemble old iPhones for recycling, considerably faster than humans.

However, Apple has received a “D” grade from Greenpeace when it comes to “its product life extension” and this is precisely because they are particularly tough to repair and recycle thus reducing their potential lifespan.

There, in fact was a report recently in The Post, which quoted recyclers as they cited a very real fire risk while removing lithium-ion batteries from old electronics from even the big players like Apple, Samsung, Microsoft, and many others.