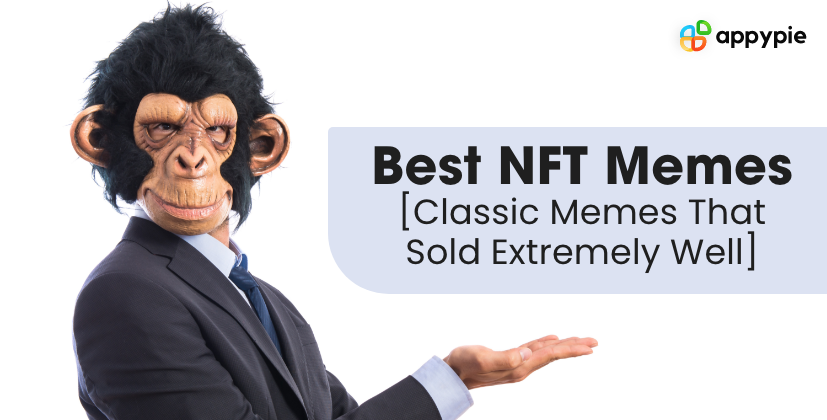 A meme is a new way of expressing oneself, an idea or thought. Memes can be anything that can be copied and transmitted from one person to another. It could be a video, photo, song, etc.

Memes are often humorous or ironic that can take anyone by surprise. In the crypto-sphere, a meme is a tool for marketing and promotion of certain cryptocurrency projects.

In this article, we’ll explain what makes NFT memes great, how to create NFT memes and 8 best NFT or classic memes that sold extremely well.

How to Create NFT Memes?

Here is how you can create NFTs using Appy Pie’s NFT generator:

Here is how you can create NFT memes using Appy Pie meme generator:

Listed here are some of the best and classic NFT memes that sold extremely well.

Doge NFT meme is a token that is an ERC-721 non-fungible token. The token is designed and inspired by the famous internet meme Doge.

In case you don’t know about it, Doge was a popular meme in 2013. The meme is also known as Shiba Inu. It is a picture/photograph of a dog with a comic sans text written at the top of it.

The Doge NFT meme was created as a fun project to demonstrate how easy it is to create a non-fungible token on the EOS blockchain.

Charlie Bit My Finger NFT is a meme that started in September 2007 and has grown to be one of the most popular memes on the Internet.

The meme features two brothers, Harry and Charlie, biting and punching each other. Harry is the older brother who bites Charlie’s finger. The clip has over 645 million views on YouTube and is still growing.

There are also many variations of these memes including “Charlie Bit My Food” memes that use the same concept as Charlie Bit My Finger NFT memes with food items replacing fingers and toes.

Bad Luck Brian NFT meme is an image macro series featuring a photo of a teenage boy with braces, acne, and shaggy hair.

There are some variations for the Bad Luck Brian meme, for example, in the original Bad Luck Brian, he was sitting on a bus and there was a lady behind him that was eating something that smelled awful.

In the Bad Luck Brian NFT version, the lady is holding a sign saying ‘NFT’. It’s referring to the bad luck that Brian has when his parents are not paying attention to what he wears. Another NFT variation has Brian holding a sign that says ‘Not For Trade’.

The Disaster Girl NFT meme is based on an innocent picture of a girl who poses in front of the house which was destroyed by fire. The girl looks very amused, but the situation she found herself in is pretty tough and it’s easy to understand why she looks so happy.

It hit the big time when a random meme site used the picture as a reaction image and it rapidly spread all over the internet.

Grumpy Cat isn’t just a cat… she’s a meme. The Grumpy Cat NFT meme is an image macro series featuring a grumpy-looking cat (Grumpy Cat) photoshopped onto images of people in mundane situations to create humorous effect of their unhappiness.

This meme started on September 22, 2012 when Grumpy Cat was featured on the social news site Reddit. Her owner Tabatha Bundesen said that the kitty’s unusual facial structure makes it look like she’s frowning and is responsible for her name.

Leave Britney Alone was first uploaded to YouTube in 2007 by Chris Cocker. He made internet history by defending Britney Spears in this viral video.

Today Leave Britney Alone is one of the top selling classic NFT memes. Crocker sold this video to an anonymous buyer online for 18.69 ether, which is roughly equivalent to around $41,000 (£29.7k).

Overly Attached Girlfriend has been viral on the Internet since 2013 and it is one of the best memes ever made. It has been viewed more than 150 million times.

The NFT meme was born when the Youtuber Laina Walker posted a video on YouTube in which she sings a parody of Justin Bieber’s song “Boyfriend”.

Now that you have an idea about NFT memes, why not make some money out of it. Use Appy Pie Design to create your own NFT memes and earn a good fortune selling them.