History and Evolution of Apple Logo: Journey from Fruit to Fame 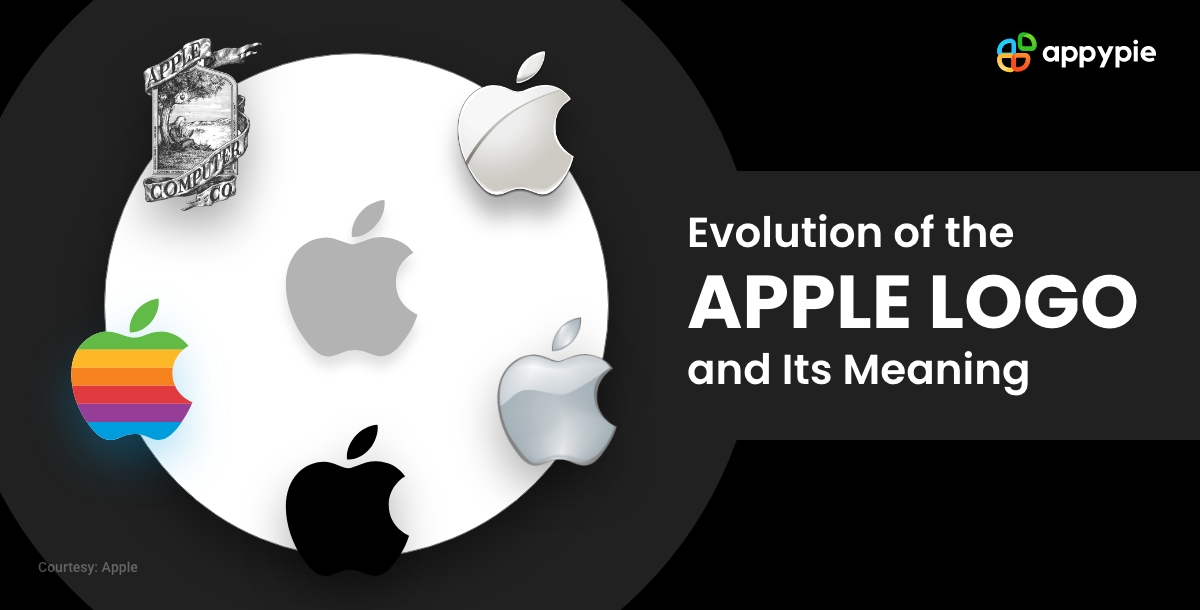 When it comes to the Apple logo, everyone would agree that it reflects that it is associated with the brand perfectly. The logo is minimalist, clean, and also looks premium and modern despite just showing one of the most common fruits with just a bite taken off. However, this wasn’t actually always the way. The Apple logo hasn’t been through various changes; when it did, the transformation was tremendous.

The Apple Company was launched in April 1976, and if we talk about the first logo, it was nothing like the Apple we all know today. It was actually the total opposite of what today’s tech giant logo is associated with. It was old-fashioned and fussy and somewhat depicted the 19th-century look. Keep reading the blog to learn and discover about the captivating Apple logo history from the start till today.

The Apple Logo History and Evolution

The Apple logo is the most recognized logo in the world. As such, it is surprising that many people have very little knowledge of its history. The Apple logo has undergone a number of changes since its introduction in 1976. The first logo was simple and elegant, featuring the signature of the company founder alongside the name of the company. The very first logo was designed by Ronald Wayne – one of the founders of Apple. The current Apple logo is quite different from the very first one, but that is to be expected. Read this blog to know the glorious history and evolution of the Apple Logo over the years: 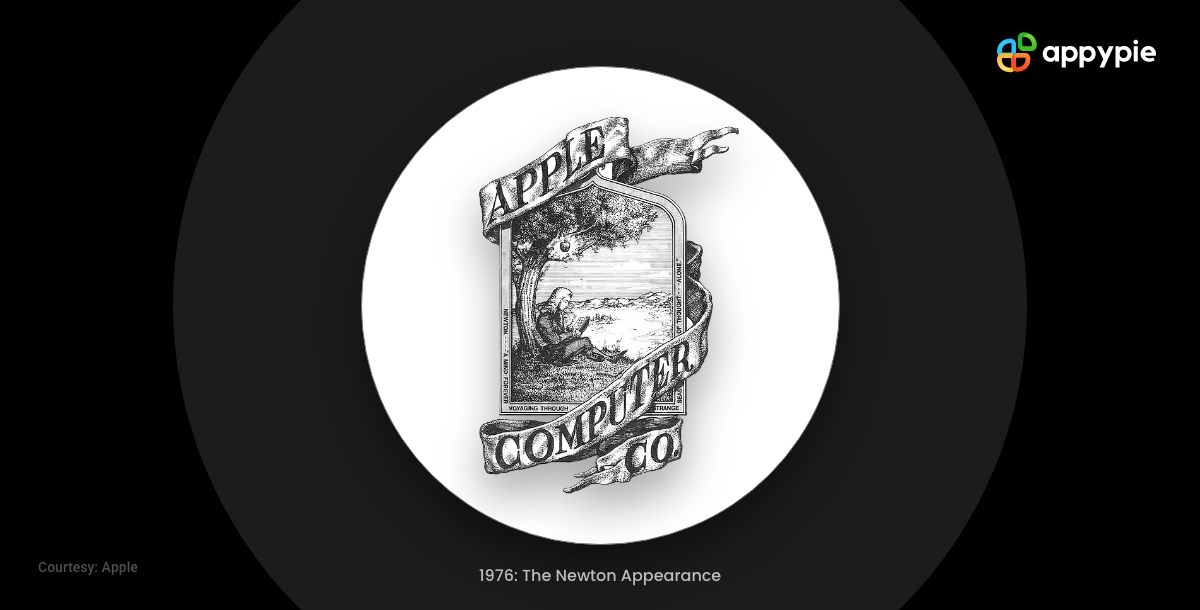 What do you think? Is that Steve Jobs , who is sitting under a tree? Obviously not, it’s Issac Newton, and he’s waiting for the gravitational law to hit him. Yes, the very first Apple logo was more like a bookshop logo or somewhat like a pub logo but not at all like one of the world’s leading tech companies. The logo also featured ‘Apple Computing Co’ all in uppercase in a ribbon muffled around it.

Was Newton’s Apple moment inspired Steve Jobs to take his brand name? Well, we don’t think so. In 1981, Jobs said in one of the press conferences that he really likes Apples, so it looks Newton’s connection was basically an afterthought. The first Apple logo was designed by a slot machine entrepreneur named Ronald Wayne, who actually left the company a few days after it was founded. However, the logo design didn’t last much longer. 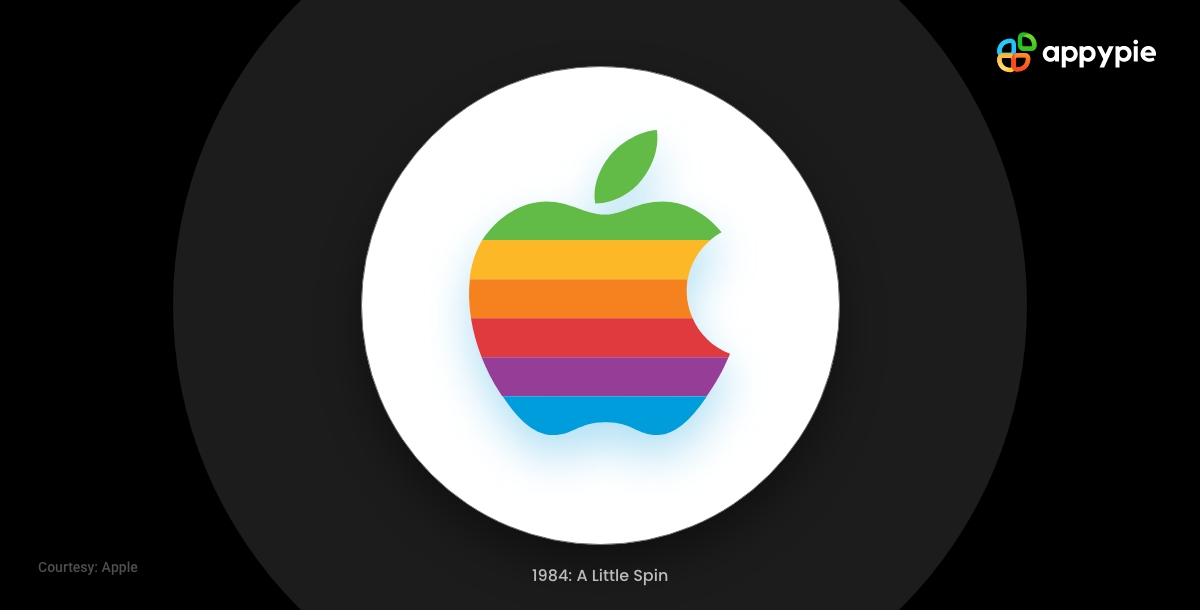 Just a year later, the remaining founders of Apple, Steve Wozniak and Steve Jobs, had wisely decided to give a more modern look to the Apple logo in order to match it with their company’s brand personality. Can you imagine scaling down that original Apple logo on mobile devices? This time Jobs brought Rob Janoff as a graphic designer for the task, and the process of launching Apple’s first computer was completed in two weeks in April 1977.

The new logo was considered to be remarkable, especially for its simplicity. It was an apple in 2D design with a bite taken out. This apple logo looked quite minimalist then; however, the logo was in rainbow coloring, making it stand out from the rest.

But how about that bite? Was it a kind of tribute to Alan Turning, who actually got killed because of eating some poisoned apple? Actually, no! One of the reasons for the bite was to clarify that the fruit is actually an apple because it could be easily misunderstood as a cherry. Also, the bite helped allow the term ‘apple’ to be placed in the space in the apple logo. 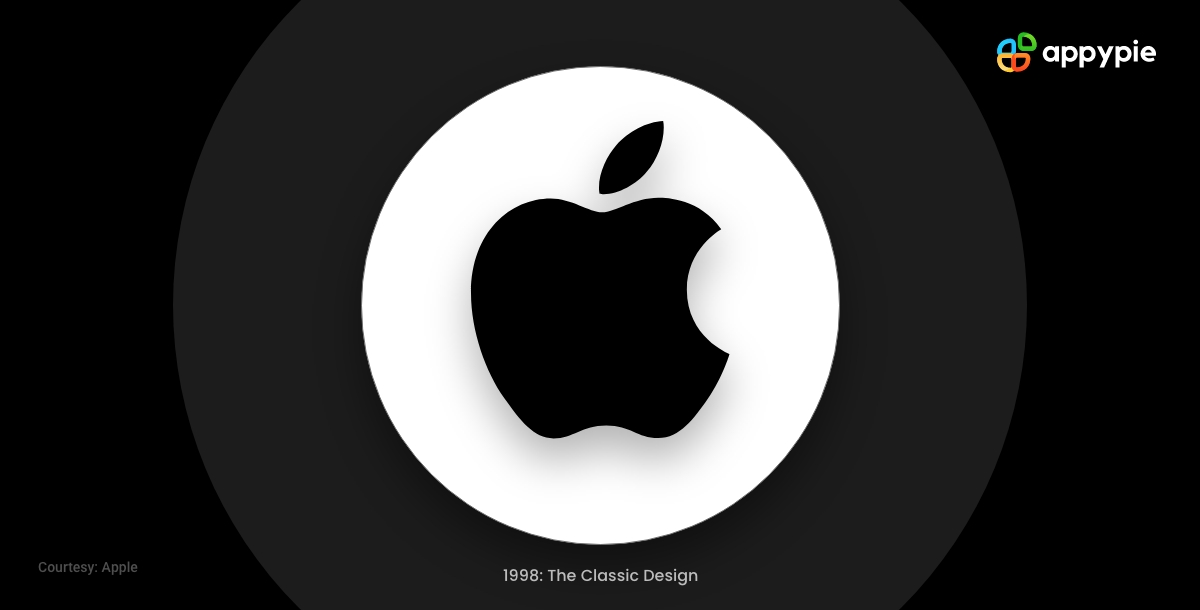 The company started to flounder a little, and then Steve Jobs returned with a bang in 1997. He came up with the plan of positioning the brand as a luxury one, and in order to do that, he needed to add a few tweaks to the old Apple logo. This time the rainbow color got ditched with a solid black color, and the shape also got honed in order to make it slightly thinner. 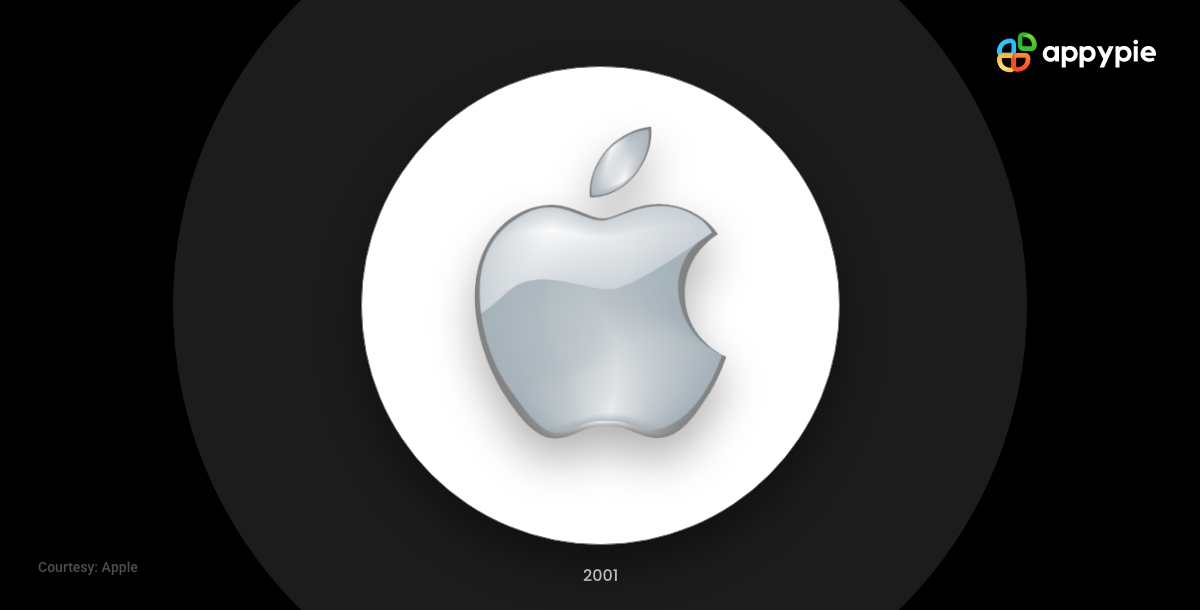 In 2001, the Apple logo tried adding some characters to it. Therefore, the flat logo got replaced by a new one introducing a silver gradient and a noticeable depth in color. This silver logo was considered so vivid that it could stand out anywhere.

Known as the glass or aqua logo, the color got so popular that it was very well-used on the brand’s online channels. 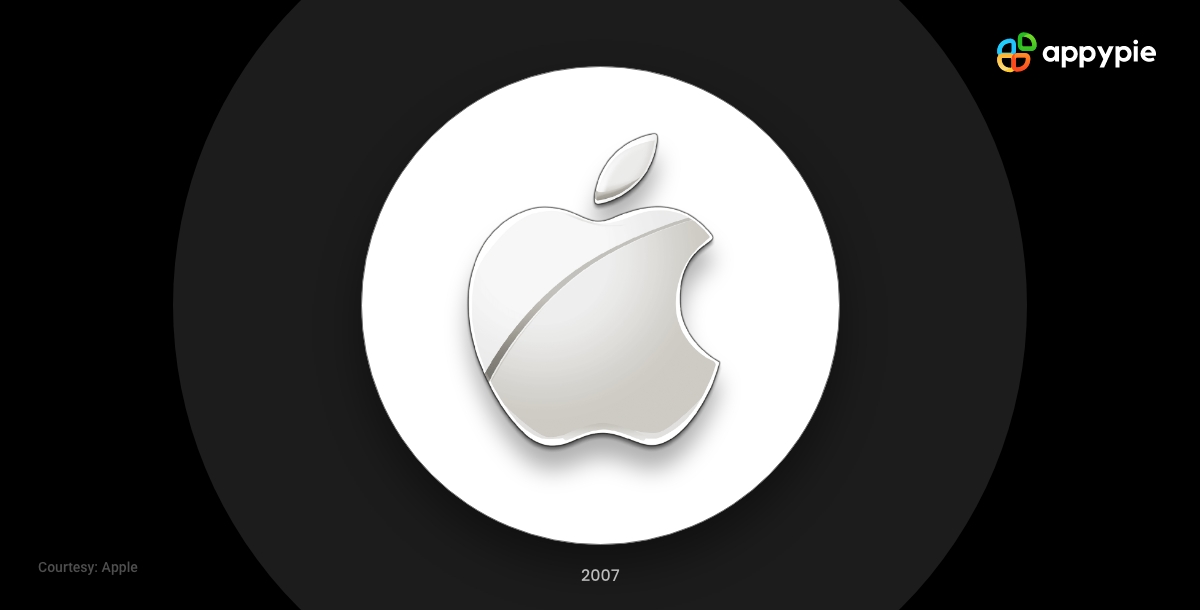 In 2007, the freshness of the Aqua Apple logo started to run out. So, a 3D spin has been introduced with a dash of chrome. Also, there was a strip running across it. This made the logo look more premium; however, this logo was not very much appreciated by the fans of solid colors.

One of the reasons for this change could be the cost of Apple devices which is way more expensive than its competitors. The logo looked sophisticated and depicted as a premium choice. Also, it arrived when the brand started focusing on sustainability and longevity. This 3D spin lasted about a decade, surviving the testing time. 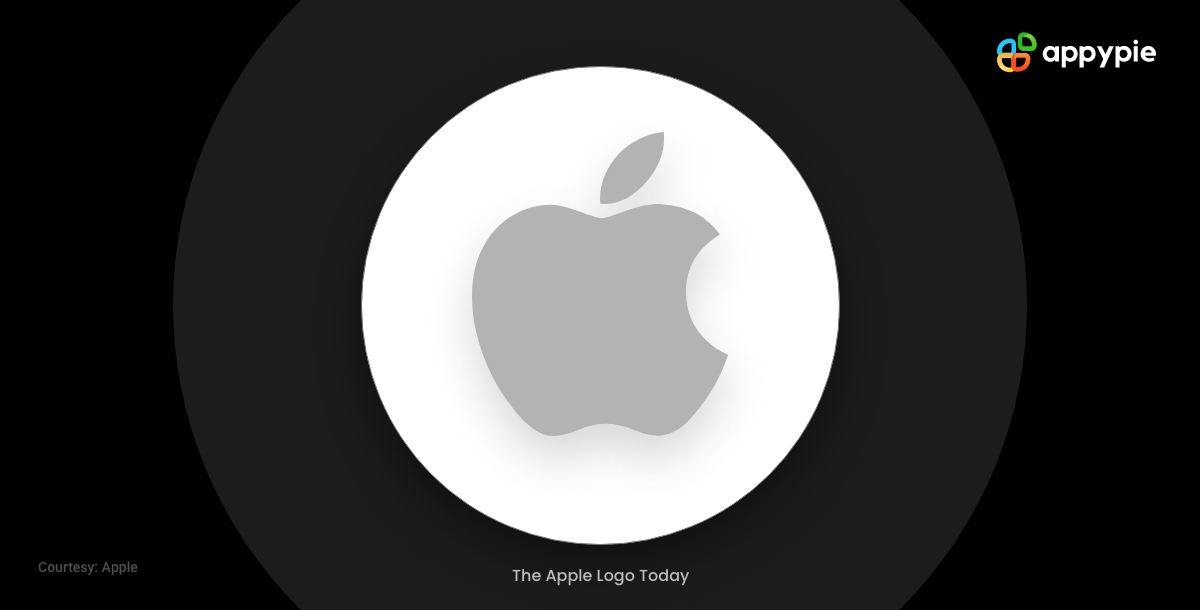 The current Apple logo has remained very similar. Depending on the device and application, it has been used in gray, silver, white, and black. The gray logo is used on the website and store as an Apple favicon. Also, it’s close to the silver logo, which gives a metallic look and appears on Apple devices.

The Apple logo is one of the most successful logos today for various reasons. Its simplicity makes it memorable and recognizable, and also it represents the name of the brand in the most literal ways. The sleek feel of it also captures the representation of a high-quality but minimalistic design.

Mystery always drives curiosity. The less you reveal about your brand; the more people crave to find out. Since its inception, Apple has always used riddles and puzzles in order to attract loyal customers. Steve Jobs has always revealed a little about their brand logo and leaves room for speculation.

Today, Apple is considered one of the strongest brands in the world. It is the only company with a market capitalization of $1.2 trillion. A big thanks to its powerful logo, marketing drive, and innovation.

Today, the bitten logo of Apple is almost everywhere. The logo has become synonymous with luxury, reliability, power, style, wealth, and innovation. Moreover, the logo is so recognizable that it can represent the company without its actual name, i.e, Apple Inc.

Design your own Favicon for Free

Design your own Logo
✖
Get the latest
Updates, Information, & Trends
directly in your inbox