App Store Turns 10 in 2018: A Peek Into The Evolution of Mobile App Development

App Builder Appy Pie: Last month the Apple App StoreApp Store – Apple
Redesigned from the ground up, the new App Store invites you to browse and download millions of apps and games for your iPad, iPhone, or iPod touch. turned 10 and we remember how it made a smashing entry recording 10 million downloads in the very first weekend! Apple’s second-generation iPhone 3G was the first ever to use mobile apps, and at this time, the apps were designed keeping this device in consideration.

Today, as we are past the half-way mark in the year 2018, the App StoreTop 10 Tips to Avoid Your App From Being Rejected by Apple App Store
So, you have built an awesome app for iPhone! However, it is not the end of the journey you took up so enthusiastically! The last hurdle and probably one of the scariest one, is to submit your app to the Apple App Store and to get it published. has almost around 2.38 million apps today and the number is only growing!

Since the first time they were launched, mobile apps have continued to change and have established themselves as an important part of major-league businesses. It is for this reason that there was a remarkable change of pace as the whole scenario of web and desktop services gave way to developing software for mobile devices whether it was in context of B2B needs or even the emerging B2E mobile apps for the enterprise.

So let’s get into the thick of the matters and take a look at this evolution of the 10 year old App Store as it introduced, ruled, changed, and made a lasting impact on the world of mobile appsTop Mobile Apps Bringing A Revolution In The World Of Social Entrepreneurship
The idea of social entrepreneurship is not new, but in the modern times it has taken on a new meaning altogether. Social entrepreneurship is all about applying practical, innovative, and sustainable approaches for the benefit of the society with a special emphasis on the marginalised and poor.!

Let’s Take A Quick Peek in the Past

In 2009, the meme-based ad campaign from Apple with the catchy “There’s an app for that” line proved in fact to be almost predictive as today, the App Store has more than 2.38 million apps and we are not even done with 2018 yet! Though this number does seem to be huge, but the need for new apps is nowhere near slowing down, even today. Now, over the ages, developers have been developing mobile apps in three different methods, developing – web, native, or hybrid apps. It is only in the recent times that Progressive Web AppsCreate a Progressive Web App – HTML5 App Maker!
App Builder Appy Pie’s Progressive Web App Builder is so easy that within minutes anyone can start developing their own web application without any coding knowledge. or PWAs have come forth as a solution to the problem of developing multiple apps that might cause a big stretch in their tight budgets!

There of course are varied opinions about the pros and cons of each of the methods, hence it is wise to opt for a development plan which suits you and your project the best.

Quite similar to a greatly optimized mobile website, a web app is stored on a remote server and is delivered to the device in question through a browser like Chrome, Firefox, or Safari. Though the web apps may look like true applications, but they are not technically a software application.

Now the web apps are typically written using the traditional web technologies including to HTML5, JavaScript, and CSS, which means that they have the distinct edge over everything else simply because of the speed with which these can be developed. Apart from the advantage of speed, the web apps are inherently come with the following advantages:

The developers need to deploy the web app on a web server only the one time in order for the users to be able to access them via the web browsers on their device. Even testing of these web apps is pretty easy and can be done with the help of some tools.

The only problem here is that the web apps are not available in the Apple’s App Store. As the web apps cannot work without an internet connection, the speed is greatly affected by the speed and availability of internet. This effectively ahs a huge impact on the user experience that people derive upon using a web app.

This the ideal choice for those people who are looking to provide exemplary user experience through a robust mobile app. Built using XCode or Swift, these apps are typically the ones that come pre-installed on your device and can even be added later through the App Store. The native apps are characteristically fast, responsive, flexible, and may be used to leverage internal components of the hardware, which is why it is preferred by the big businesses! 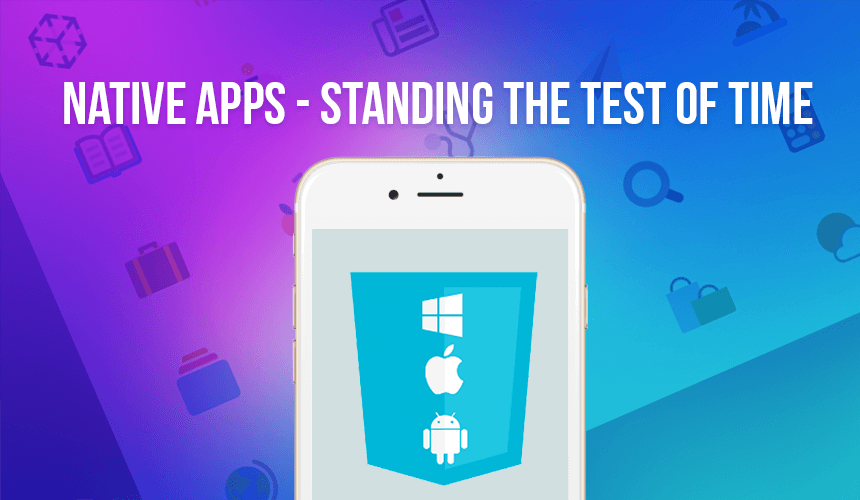 Today, majority of the challenges and struggles of creating, testing, distributing, and maintaining a native app can be automated through visual development tools. This means that the developers create and design native mobile apps without having to go through the trouble of writing the entire UI and the business logic code, from the very beginning.

The given name – Hybrid Apps, pretty much explains everything there is to be said about it. These were essentially developed to come up with a combination of the best attributes of the web apps and the native apps. The process of developing hybrid apps, however is quite similar to that of developing web apps.

The hybrid apps have the distinct advantages of faster development, speed to market, and cross-platform affinity. The development requires little to no native coding as it leverages web technologies which are basically cross-platform. Hybrid app development requires web development skills, but they have the ability to work offline, much like the native mobile apps! Though these can be your published apps, but can also work wonders as the stopgap placeholder for your native mobile app, that might still be under development. The hybrid apps, in general provide more advanced features than the web apps which are bound by the limitations of the host OS.

The problem with hybrid apps is that, quite like the web apps, there would be issues regarding their speed, performance, and their UI experience limitations. The hybrid apps run on the platform’s web engine, which adds a layer between the user and the application. It is this layer which is responsible for some performance issues which make the app less flexible which eventually hampers the whole User Experience.

Introduced in the year 2015, Progressive Web Apps have established itself as a great option for those who want the best of both worlds. PWAs offer speed – the inherent trait of an app, and easy access to everyone – which is a characteristic of the mobile web.

With an ability to function much like a native app, PWAs actually pack quite a positive punch with:

It is for a number of reasons that PWAs might seem to be the right choice, especially when it comes to retail business apps where they have been known to increase the conversion rates considerably. However, while deciding to go with a PWA it is advisable to keep the big picture in sight.

No matter how convenient they might be, PWAs still do not offer the same functionality as a native app does. Though they have managed to gain access to some of the internal hardware components through the device OEM support, but there still are significant limitations in this regard. To be honest, they are not adept at offering the same user experience as that of a native app, which the users today have come to expect.

It’s time to step back and take a look at the big picture presented by the evolution of the world of mobile application development. While a native app offers rich features, better performance, and higher functionality, the PWAs offer an option that is essentially a light version of the proverbial native app experience!

As User Experience is of prime importance for most of the organizations, native apps are still the preferred choice for most of the organizations. Native apps make possible the holistic, collaborative experience that we as app users have almost come to take for granted. Integration of phone and SMS, calendar, alarms, contacts, alarms, contacts, and camera, even GPS for that matter have become more of an expectation than groundbreaking inclusions in any app.

Even though there would always be a great number of options that would emerge on the horizon of the app world, it is the native apps that would reign supreme for a long time to come. Not only are the native apps faster and more efficient but also assures the users of great quality since they are available for downloads on the App Store.

Now, for all the evolution that the mobile apps have gone through, it would be unfair to crown a king as the best suited option will obviously differ from project to project depending on the unique requirement. After all, it is all about creating experiences that people of varying stakes including customers, business partners, or employees would adopt. This may well be accomplished by leveraging the right tools which have a wider scope than native and hybrid development and incorporating visual development with the intent of making things simpler by bringing down the complexity of what has till now been inherently tedious & time consuming.

About The Author
twitter|linkedin

Vivek Srivastava, co-founder, Appy Pie, is a digital analyst and writes extensively about website and app promotion. He has over 8 years of experience in outbound and inbound digital marketing, website analytics, social media, conversion rate optimization and business analytics. Before entering the Digital arena, Vivek covered technology news for TV channels, Local Newspapers and Radio Channels. He also has a keen interest in music and he enjoys playing music instruments.